Christmas, when the Incarnation of our Lord, hidden in the womb of Mary for nine months, is revealed to the world, is the implementation of all the hope of humanity in the long ages since the Fall and the first hint of redemption. It is the realisation of Israel’s longing for a Messiah-King who will save them from their enemies, though they did not then realise that the enemy is within and so salvation must also be internalised. It is the comprehension of Mary’s place as the Daughter of Zion, the Flower of Israel and now Mother of Hope, prefigured by so many women to whom God called. It is the implementation of the hopes of the Apostles as they waited for and received the Holy Spirit and built up the Church, the Body of Christ, in the same hope with which she celebrates today. And it is the hope of the world, though the world confuses its beauty with baubles and its glory with glitter.

Pope Francis speaks of it in this way:

It is a night of glory, that glory proclaimed by the angels in Bethlehem and by ourselves as well, all over the world. It is a night of joy, because henceforth and forever, the infinite and eternal God is God with us. He is not far off. We need not search for him in the heavens or in mystical notions. He is close at hand. He became man and he will never withdraw from our humanity, which he has made his own.

This is a wonderful truth which the Holy Father has highlighted here. “He became man and he will never withdraw from our humanity, which he has made his own.” Human nature is not something which Jesus took in order to live on earth with us, and then discarded at some point to return to heaven as a purely spiritual being. No, when the Word was made flesh and dwelt among us (Jn 1:14), he was made flesh forever. He has not discarded our human nature, but has taken it with him into heaven. One of our race dwells there with the Father and the Holy Spirit, and not only the Lord, but his Blessed Mother also, as he would not leave her behind. This is an amazing truth on which we can ponder at Christmas. This now is our hope; that we too will be in the presence of God, not as disembodied spirits, but, like our Blessed Lady, present to God in our full body- and-soul humanity. This is indeed a great hope, expressed already in the ancient book of Job:

For I know that my Redeemer lives,
and at last he will stand upon the earth;
and after my skin has been thus destroyed,
then from my flesh I shall see God.

However, although we have such a great hope, this does not absolve us from an awareness of those who live without hope, who suffer persecution for their hope or whose hopes are vested in those things which can never satisfy the deepest human needs. Pope Francis advises us here:

The new-born Child challenges us. He calls us to leave behind fleeting illusions and to turn to what is essential, to renounce our insatiable cravings, to abandon our endless yearning for things we will never have. We do well to leave such things behind, in order to discover, in the simplicity of the divine Child, peace, joy and the luminous meaning of life.

He also confronts us with the reality of the Christmas season for many children:

Let us allow the Child in the manger to challenge us, but let us also be challenged by all those children in today’s world who are lying not in a crib, caressed with affection by their mothers and fathers, but in squalid “mangers that devour dignity”. Children who hide underground to escape bombardment, on the pavements of large cities, in the hold of a boat overladen with immigrants… Let us allow ourselves to be challenged by those children who are not allowed to be born, by those who cry because no one relieves their hunger, by those who hold in their hands not toys, but weapons.

The first Christmas also was not without its challenges. The Holy Family were away from home, in unsuitable accommodation and unable to return to Nazareth for some time because of the political situation. And immediately after the joy of Christmas Day, within the Octave of Christmas, we find the Church recalling the memory of her first martyr, St Stephen, the deaths of the Holy Innocents and the murder of St Thomas Becket. Why does the Church recall these terrible events so close to the joy of Christmas?

The mystery of Christmas, which is light and joy, challenges and unsettles us, because it is at once a mystery of hope and of sadness. It has a taste of sadness, inasmuch as love is not accepted, and life discarded.

The time in which we live, the age of the Holy Spirit and the Church, is a time of tension. Unlike the previous ages, that of the Old Testament in which the Father was worshipped but the Holy Trinity was not yet revealed, and that of the Son in which the Second Person of that Trinity lived among us but “the world knew him not” (Jn 1:10), our present age is not yet complete. We rejoice in the fulfilment of the hopes of previous ages, especially in the Incarnation at Christmas time, but we live in close juxtaposition with persecution of Christians, terror attacks, widespread abortion and general scorn and unbelief – in an age of hope not yet fully realised. It was the same in the early days of the Church; the Holy Innocents lost their lives through the whim of a powerful ruler and Stephen died because he served and proclaimed Christ in a land where he was denied. As Pope Francis puts it, “The Protomartyr Stephen, full of the Holy Spirit, was stoned because he professed  his  faith  in  Jesus  Christ,  the  Son  of  God.”70 Later, St Thomas Becket died for the sake of justice, holding his faith more dearly than his friendship with the King; whatever the historical intrigues surrounding the events, it is clear that he stood firm in his faith to the point of death, preferring the hope of eternal life to the favour of the King.

Pope Francis urges us to remember at Christmas those who are persecuted for their faith:

Today too, in order to bear witness to light and to truth, the Church experiences, in different places, harsh persecution, up to the supreme sacrifice of martyrdom. How many of our brothers and sisters in faith endure abuse and violence, and are hated because of Jesus! I shall tell you something: today’s martyrs are more numerous with respect to those of the first centuries. When we read the history of the first centuries, here in Rome, we read of so much cruelty toward Christians; I tell you: there is the same cruelty today, and to a greater extent, toward Christians. Today we should think of those who are suffering from persecution, and…be close to them with our affection, our prayers and also our tears.

So, in the midst of our rejoicing, we remember, as the Church does, the sorrow and pain of her history. We remember, as our present Holy Father Pope Francis reminds us, that many Christians today are persecuted for political reasons, like Stephen and St Thomas were, and many children never come to birth. And we pray, as encouraged by Pope Francis, for joy and courage to continue in our faith – sustained always by hope, for Christ who comes to us at Christmas is the true Hope of the world.

In making room in our heart for the Son of God who gives himself to us at Christmas, let us joyfully and courageously renew the will to follow him faithfully, as the only guide, by continuing to live according to the Gospel attitude and rejecting the mentality of those who dominate this world.

Let us raise our prayers to the Virgin Mary, Mother of God and Queen of Martyrs, that she may guide us and always sustain us on our journey in following Jesus Christ, whom we contemplate in the grotto of the Nativity and who is the faithful Witness of God the Father.

View basket “The Hope of Christmas with Pope Francis (ebook)” has been added to your cart. 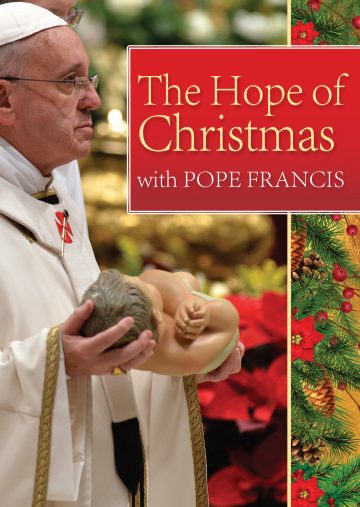 The Hope of Christmas with Pope Francis (ebook) Amette Ley