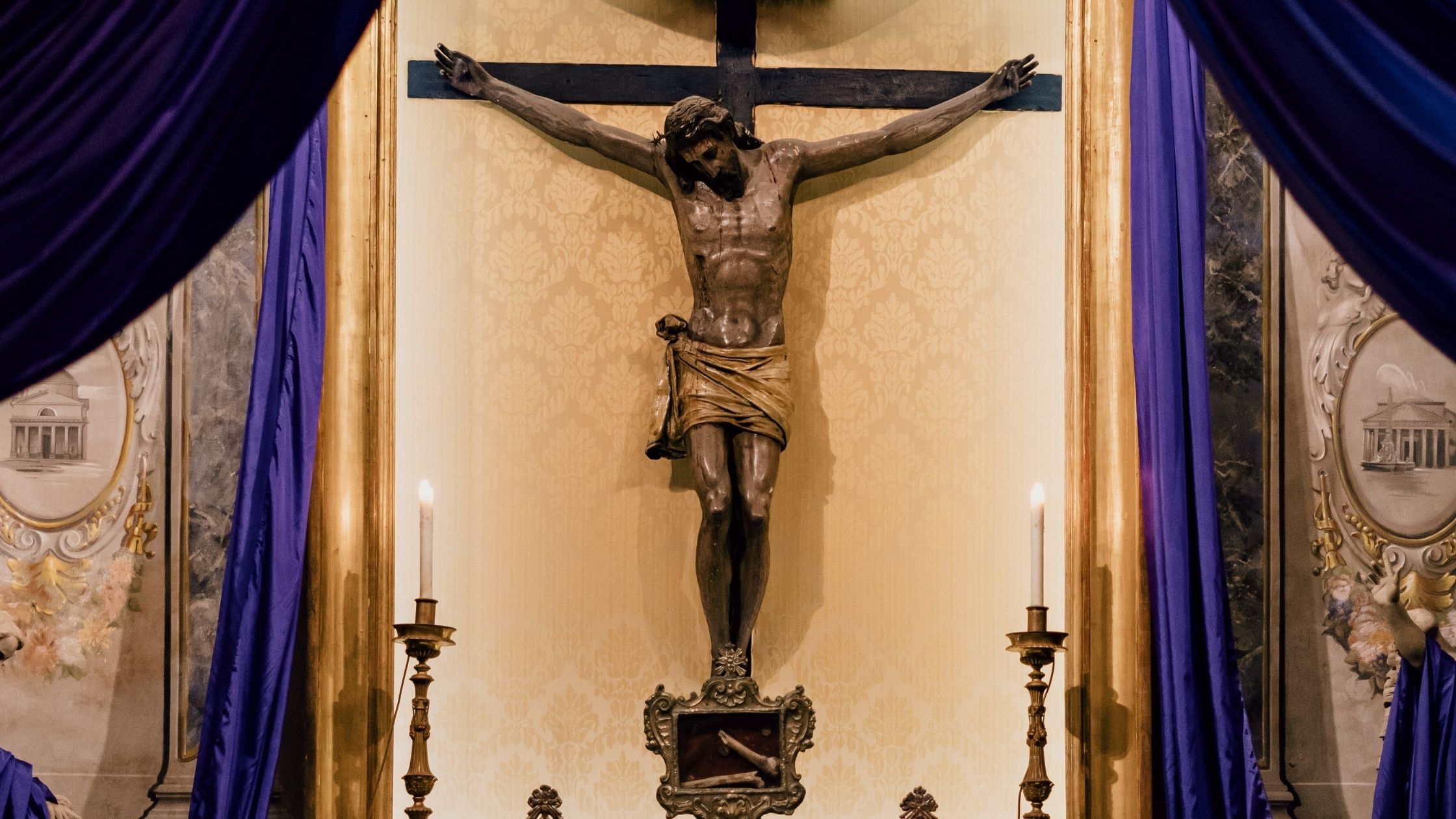 Lent is a paradoxical season. On the one hand, the word itself names something joyful: lencten in Old English means “springtime”, because the days begin to lengthen. The dead of winter is behind us, and the grass will begin to show through the snow cover any day. On the other hand, Lent is a season of asceticism. The word askesis originally meant the kind of training or discipline that an athlete underwent. Then it was applied to spiritual self-discipline for the sake of training one’s prayer life. One lifts weights at the gym to gain strength in the arm; Lenten asceticism is doing spiritual reps. It is the discipline required to become an icon of Christ, and make his image visible on our faces. The whole aim of the Lenten asceticism is to refresh our spiritual conformity to Christ.

Time and time again Israel’s prophets spoke about the need to go back into the desert where Moses had led Israel’s ancestors. This was a land between Egypt (which they had just left) and the Promised Land (to which they were still on their way). In this in-between-place Israel remembered God, relied only on God, listened more carefully to God. They were there for forty years. We are in Lent for forty days.

The origins of Lent

Lent originated as the final preparation by catechumens for their upcoming baptism at Easter. They had spent years in the first phase of their catechumenate, when they had been called “auditors” because they listened to the Word of God. They heard it in Scripture while attending the first half of the Mass (then called the liturgy of the catechumens), and they heard it in the life-instructions they were learning from their sponsors about prayer, fasting, and almsgiving. Now, at the beginning of the forty-day countdown to the font, they were enrolled by the Bishop by “giving in their name” to be written down by his own hand. They were chosen for baptism, so in the second phase of their catechumenate they were called “elect”.

It is easy enough to see how the already-baptised would find it valuable to go back into that desert, too. And so do we. We return to the desert in order to remember God, rely on God, listen more carefully to God’s promises. Lent is offered to us as a time to open our ears, soften our hearts, intensify our asceticism, refocus our charity. As the Collect for Ash Wednesday says, “Grant, O Lord, that we may begin with holy fasting this campaign of Christian service, so that, as we take up battle against spiritual evils, we may be armed with weapons of self-restraint.” Ascetical training.

Although the Church calls for an increase of all three Christian disciplines – prayer, fasting, and almsgiving – it is fasting that most people associate with Lent, so a word should be said about it. Just don’t neglect the other two.

There are many reasons to fast, and with a little reflection you could think of as many as I could. People fast for health reasons (like when your cholesterol is too high), for medical reasons (like before a blood test), or for reasons of vanity (like the magazines encourage). But a liturgical fast is different. Its reason is given in Scripture: “Man shall not live by bread alone.” Jesus recited this passage from Deuteronomy 8 during his fast in the desert. In any kind of discipline we discover that we must deny ourselves temporary goods for a greater goal. The athlete gives up desserts to get in shape. In the liturgical case, we deny ourselves temporal goods for an eternal goal. There is nothing wrong with bread, but when tempted to turn stones into bread Jesus replied that there is a higher good. We restrain what we eat during Lent so that we can remember that higher good. The primary aim of fasting is to make us conscious of our dependence upon God.

The number forty appears numerous times in Scripture, and seems to represent a time of testing or judgement. It is the length of time necessary to accomplish some major design by God.

It was for forty years that Israel ate manna in the desert, and it was for forty days that the rain fell in Noah’s day, that Moses was on the mountain with God, and that the city of Nineveh had to repent. But the most influential scriptural example was the forty days that Jesus was tempted (this being the gospel lesson on the first Sunday of Lent in all three cycles). We follow our Lord into in the wilderness.

How did Lent come to begin on a Wednesday? A feast always trumps a fast, and Sunday is a feast. Therefore, Sundays are not counted, and six weeks times six days equals thirty-six; add four to reach Wednesday. (In the eastern Church neither the Sabbath nor Sunday are counted, so they have an eight-week Lent: five times eight.)

The Scripture for Ash Wednesday is the same in each lectionary cycle. The prophet Joel tells us why we are doing it, and in the Gospel of Matthew Jesus tells us how to do it. Even now, Joel proclaims – after we’ve failed in our resolve and fallen short of our intentions – if we return to him with our whole heart we will find him gracious and merciful. Lent begins with a prophetic announcement that God is “slow to anger, rich in kindness, and relenting in punishment.” So gather the people, notify the congregation, assemble the elders and the children. Get a move on!

Then in the Beatitudes Jesus tells us how to fast. Do not be concerned with the impression you hope to make on other people. Go to your inner room, don’t toot your own horn (“don’t blow a trumpet before you when you give alms”), don’t look gloomy while you fast. Anoint your head, wash your face, don’t look like you’re fasting. It is always jarring to hear this gospel just before a smear of ashes is put on our forehead but we are not receiving those ashes to show off, rather to join Job, Daniel, David and others in a sign of repentance, mourning and humility. We are being told to be concerned with our own hearts. Then our reward will not come in the form of admiration by others, we will be rewarded by the only one who can see what is hidden in our hearts, namely our Father.

The Scripture we will hear

The first Sunday of Lent tells us of Jesus’ temptation, whether the readings are from Matthew, Mark or Luke (cycle A, B or C). It is paired with a different Old Testament reading in each cycle: the fall, the covenant with Noah, and the command to bring first fruits to the altar. The Old Testament reading of the second Sunday focuses on Abraham: his call, the terms of God’s covenant with him, and the ratification of the covenant by sacrifice.

On the remaining three Sundays, the Old Testament readings tell familiar stories about redemption and covenant. In cycle A we hear about Israel grumbling in the wilderness, God’s election of David as king, and Ezekiel’s prophecy about old bones rising. In cycle B the Ten Commandments are repeated, the bronze serpent lifted up heals people from snake bites, and a new covenant will be written on a heart of flesh. Finally, in cycle C the prophet Isaiah wonders why we spend money on what is not real, Joshua celebrates a Passover before going into the Promised Land, and God promises Isaiah that he will do a new deed.

In two of the lectionary cycles (B and C), those Old Testament lessons are paired with gospel readings that line up along an axis pointing to Golgotha. Pressure is mounting. Jesus has set his face to go to Jerusalem and suffer, and when Peter objects he is called “a Satan.” Jesus clears the temple; he will be lifted up on the cross to heal us because God so loved the world. The transfiguration on Mt Tabor is described, the prodigal son is welcomed back, and Judas objects to using expensive perfume to anoint Jesus’ feet in anticipation of his burial.

However, cycle A of the lectionary is special. When there are catechumens for baptism at the coming Easter, they are to receive the scrutinies on the third, fourth and fifth Sundays of Lent. “The scrutinies…are rites of self-searching and repentance…and meant to uncover, then heal all that is weak or sinful in the hearts of the elect” (Rite of Christian Initiation of Adults, ¶141). In that case, the gospel readings from John are always used, no matter what cycle one is in for the rest of the year. These have strong baptismal themes: water, blindness and new life. They are the gospel accounts of the Samaritan woman at the well, the man born blind and the raising of Lazarus, and they are co-ordinated with the scrutiny of the catechumens on their home stretch.

The last week of Lent is Holy Week, and will begin with Palm Sunday. The day before Palm Sunday we pray to God to grant us “the grace to will and to do what you command, that the people called to eternal life may be one in the faith of their hearts…” If the season of Lenten asceticism has softened our hearts, then we will want to do what God commands and we will go into Holy Week as one people, with one faith and one hope. 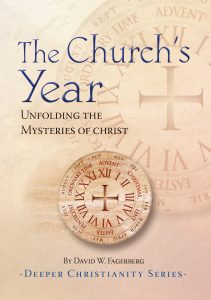 To explore the meaning of the Church’s calendar further, order your copy of The Church’s Year.