Europe has six patron saints, one added by Pope St Paul VI (St Benedict), and the other five co-patrons added by Pope St John Paul II. Each of these six of these patrons has an incredible story of how they responded to God’s call in their life, a call which had a significant impact on the Church. Discover their stories, as told in our book Online With Saints by Fr Michel Remery. 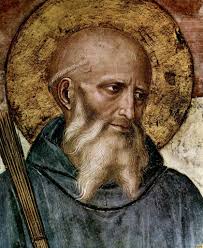 Benedict was born in Nursia, Italy, where he grew up with his sister Saint Scholastica. The little we know about his life comes from the writings of Saint Gregory. Benedict studied in Rome, but felt himself drawn to silence, so that he could contemplate the love of God quietly. He became a hermit, living alone in a cave near Subiaco for several years. He was asked to be abbot of a nearby monastery, but his governance was considered too strict, and apparently someone even tried to poison him, so he returned to his cave.

As disciples gathered around him, he decided to found the monastery of Monte Cassino in a deserted place in Italy. He wrote a monastic Rule, containing a set of rules to help his monks live a life of prayer, study, manual work, and community life. This Rule of Saint Benedict shows him as a fatherly figure, firm but loving, and above all a man with great love for Jesus. It presents a balanced way of life, alternating between prayer and work, duty and rest, private study and community life. This is summarised in the motto ora et labora, pray and work. Benedict’s Rule inspired the foundation of many monasteries throughout Europe and the entire world.

O God, Benedict dedicated his entire life to work and prayer, in his search to be with you. Help me to search for you in my life and learn to pray better. Saint Benedict of Nursia, pray for us!

Bridget was born in Uppland, Sweden. She married Ulf Gudmarsson at the age of 13 or 14 (yes, that was quite a normal age to marry!) and had eight children. They had a very deep and loving relationship. Bridget often prayed with her children. She became a lady in waiting to the queen. Early 1344 Ulf fell ill, and he died not long after. Bridget showed her deep love by staying with him even after death, spending hours of prayer at his graveside. Since the age of ten she often had visions of Jesus hanging on the cross to save his people (hence the title ‘Saviour’). She was 41 years old when she felt that God was calling her to found a new religious order, named after Jesus the Holy Saviour. Her second daughter also became a nun, and is known as Saint Catherine of Sweden. Bridget went to Rome to ask official recognition for her order from the pope, but with the papacy being undecided, it took 20 years to get the long-awaited confirmation. She died three years later in Rome. After her death, the order spread quickly throughout Europe and into the world.

O God, Bridget picked up her life after her great loss. Help me to recognise that your love is forever. Saint Bridget of Sweden, pray for us! 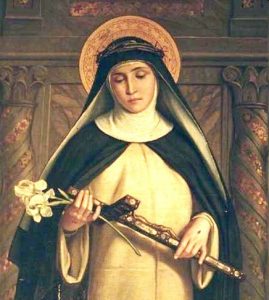 Catherine became very influential because of her deep knowledge of philosophy and theology, combined with her total dedication to God. She exchanged letters with influential friends, and even with Pope Gregory XI. She begged for peace and for the reform of the clergy. At the time, the popes lived in Avignon, France. In 1376, Catherine was sent to Avignon as ambassador of the Republic of Florence. Her attempts to establish a peace treaty with the Papal States were unsuccessful, but she also used the opportunity to try to convince the pope to return to Rome. A year later the pope indeed changed his residence to Rome. He sent Catherine to Florence to bring about peace, which she eventually was able to do. During all her diplomatic activity she spent much time in prayer, and she had various mystical experiences. She wrote hundreds of letters, prayers, and her profoundly spiritual book The Dialogue of Divine Providence. She died when she was 33 years old.

O God, Catherine did a lot of good for the Church. Help me to find my own vocation and by living it to the full, contribute to our Church community. Saint Catherine of Siena, pray for us! 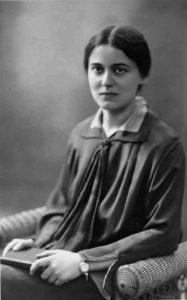 Edith was born in Breslau, Poland, into a Jewish family, but she considered herself an atheist. She studied philosophy with the famous philosopher Husserl. During the First World War she served as a Red Cross nurse. She wrote a philosophical doctorate on empathy. She wanted to become a professor, but this was not allowed for women at the time. As she was reading the autobiography of Saint Teresa of Avila she discovered the truth of the Catholic faith and eventually asked to be baptised. This also began her interest in Catholic philosophy, with Saint Thomas Aquinas as a lead. Some ten years after her conversion, Edith entered the monastery of the discalced Carmelites in Cologne, Germany. Her religious name was Teresa Benedicta of the Cross. In the convent, she continued her studies of philosophy and published various important academic works.

As the Nazi regime started to become a threat, her superior sent her to a monastery in Echt, the Netherlands. Here she studied the works of Saint John of the Cross, a spiritual friend of Teresa of Avila. This brought her closer to God. When the Dutch bishops publicly denounced Nazism, Edith was sent to the extermination camp at Auschwitz, where she was probably killed in the gas chambers two days after arrival. She died as a direct consequence of the protest of the Dutch bishops against Nazism, and thus was killed for being a Catholic, which makes her a martyr of the faith.

O God, Edith found you after a long period of doubts and darkness. Help me, also when in doubt, to continue to ask your help and search for the truth. Saint Edith Stein, pray for us! 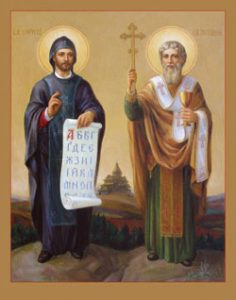 Cyril and Methodius were brothers from Thessalonica, Greece. Cyril was the thinker and the scholar of the two: he was professor of philosophy in Constantinople. Methodius was a monk and abbot. Emperor Michael III and the Patriarch of Constantinople, Photius asked them to go and proclaim the gospel in the East of Europe. Cyril and Methodius were the first to use Slavonic in their explanations of the faith, for people in the East did not understand Latin or Greek. They translated the texts of the liturgy and the Bible into Slavonic (still used today as Old Church Slavonic). To do so properly, they invented a Slavic alphabet based on Greek letters, which was named after Cyril. The Cyrillic alphabet is still used for Russian, Ukrainian and several other Slavic languages. In Rome, Cyril and Methodius managed to convince Pope Adrian II to permit Slavic as the official liturgical language in the East of Europe.