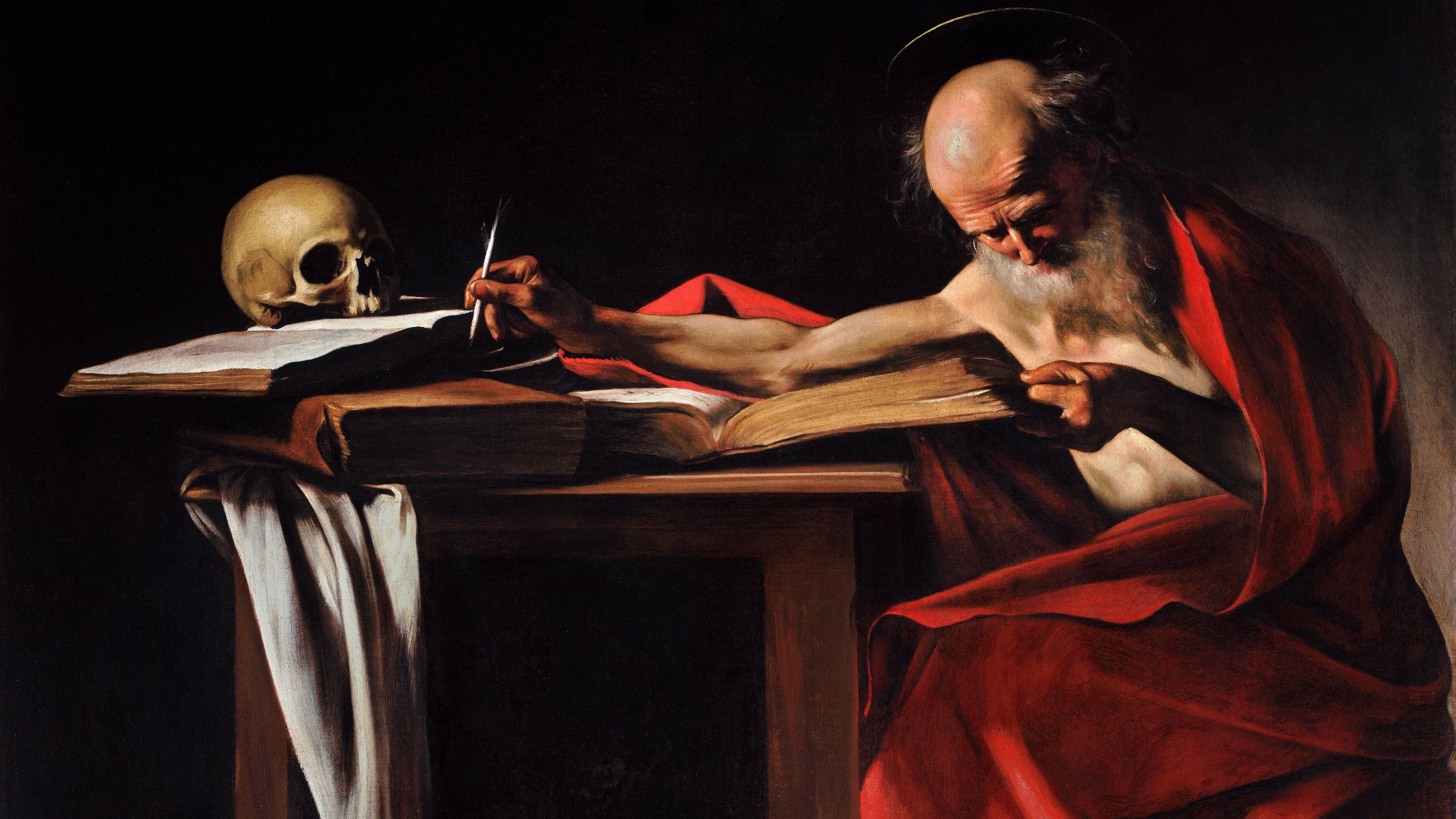 “Begin now to be what you will be hereafter.”

St Jerome (Hieronymus) (c.342-420) was born in Strido (now in Croatia, then part of the Roman province of Dalmatia) and studied in Rome, where he was baptised. He retired for a while to Syria to live as a hermit and learnt Hebrew at the hands of a rabbi. Between 382 and 385 he was in Rome as secretary to Pope Damasus, who commissioned him to revise the Latin version of the Bible. He went to Bethlehem to concentrate on this work, together with the writing of Scriptural commentaries and theological works.

O God, who gave the Priest Saint Jerome
a living and tender love for Sacred Scripture,
grant that your people
may be ever more fruitfully nourished by your Word
and find in it the fount of life.
Through our Lord Jesus Christ, your Son,
who lives and reigns with you in the unity of the Holy Spirit,
one God, for ever and ever.

The distinctive feature of Saint Jerome’s spirituality was undoubtedly his passionate love for the word of God entrusted to the Church in sacred Scripture. All the Doctors of the Church – particularly those of the early Christian era – drew the content of their teaching explicitly from the Bible. Yet Jerome did so in a more systematic and distinctive way.

Exegetes in recent times have come to appreciate the narrative and poetic genius of the Bible and its great expressive quality. Jerome instead emphasised in sacred Scripture the humble character of God’s revelation, set down in the rough and almost primitive cadences of the Hebrew language in comparison to the refinement of Ciceronian Latin. He devoted himself to the study of sacred Scripture not for aesthetic reasons, but – as is well known – only because Scripture had led him to know Christ. Indeed, ignorance of Scripture is ignorance of Christ.

Jerome teaches us that not only should the Gospels and the apostolic Tradition present in the Acts of the Apostles and in the Letters be studied and commented on, but that the entire Old Testament is indispensable for understanding the truth and the riches of Christ. The Gospel itself gives evidence of this: it speaks to us of Jesus as the Teacher who appeals to Moses, the Prophets and the Psalms (cf. Lk 4:16-21; 24:27.44-47) in order to explain his own mystery. The preaching of Peter and Paul in the Acts of the Apostles is likewise rooted in the Old Testament, apart from which we cannot fully understand the figure of the Son of God, the Messiah and Saviour. Nor should the Old Testament be thought of merely as a vast repertoire of citations that prove the fulfilment of the ancient prophecies in the person of Jesus of Nazareth. Rather, only in light of the Old Testament prefigurements is it possible to know more profoundly the meaning of the Christ event as revealed in his death and resurrection. Today we need to rediscover, in catechesis and preaching, as well as in theological exposition, the indispensable contribution of the Old Testament, which should be read and digested as a priceless source of spiritual nourishment (cf. Ez 3:1-11; Rev 10:8-11).

Jerome’s complete devotion to Scripture is shown by his impassioned way of speaking and writing, similar to that of the ancient prophets. From them, this Doctor of the Church drew the inner fire that became a vehement and explosive word (cf. Jer 5:14; 20:9; 23:29; Mal 3:2; Sir 48:1; Mt 3:11; Lk 12:49) necessary for expressing the burning zeal of one who serves the cause of God. As with Elijah, John the Baptist and the Apostle Paul, indignation at lies, hypocrisy and false teaching inflamed Jerome’s speech, making it provocative and seemingly harsh. We can better understand the polemical dimension of his writings if we read them in the light of the most authentic prophetic tradition. Jerome thus emerges as a model of uncompromising witness to the truth that employs the harshness of reproof in order to foster conversion. By the intensity of his expressions and images, he shows the courage of a servant desirous not of pleasing others, but his Lord alone (Gal 1:10), for whose sake he expended all his spiritual energy.