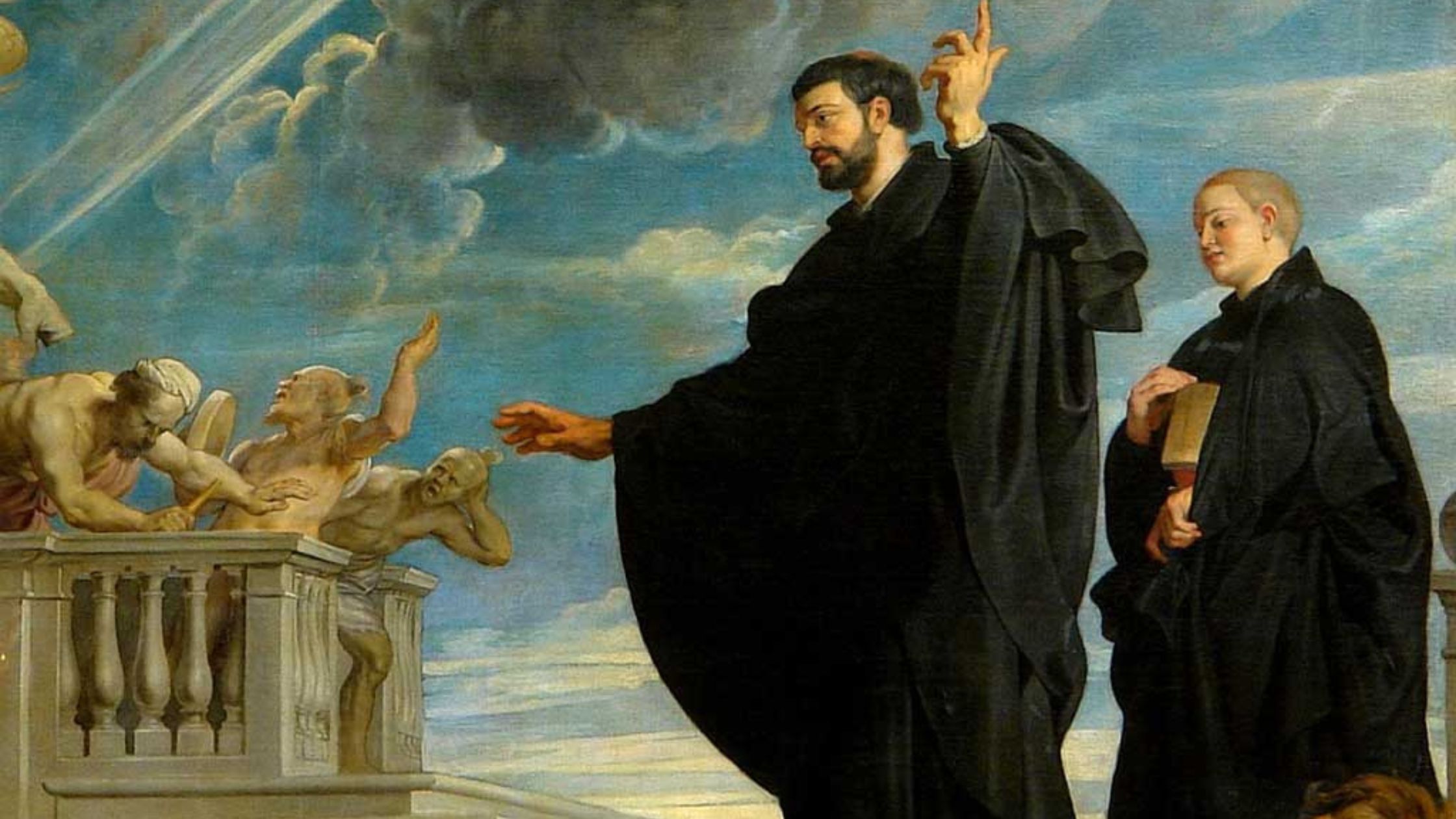 ‘In these parts many people do not become Christian because…there is no one to tell them about Christ… I would want to cry out like a madman to…those students in Europe… They should not only study science and gain knowledge, but keep in mind with what intention God has given them their talents. Then they would surely dedicate more attention to their prayer life. They would get to know God more closely and give him a place in their lives. They would learn to listen to what God wants to say to them. They would be able to renounce their personal ambitions and desires, and choose only to live according to God’s desire and choice for them. Then they would exclaim from the bottom of their hearts: “Lord, here I am. Tell me what you want me to do. Send me everywhere you want me to go, even to India.”’

Who was St Francis Xavier?

Francis was born in Xavier Castle in Navarra, Spain, and had very good prospects for his life. When he studied in Paris, he met Ignatius of Loyola. After much persuasion, Francis joined him as one of the first Jesuits. He became a very powerful missionary with one great desire: he wanted to tell everyone how much happiness they could find when they opened themselves to God in their lives and in their prayer. In this sense he is very much like the Apostle Paul.

Francis first went to Goa in India. With the help of interpreters he spoke to poor fishermen. Tirelessly, he went from village to village to explain the faith, using a small catechism in the Tamil language. Within a few years, thousands of people asked to be baptised. He deemed it important to ensure the continued pastoral care of these communities and encouraged the education of native clergy. Francis’s only desire was to help people find the way to Jesus in their lives. With that in mind he continued to travel.

At one point he visited the tomb of the Apostle Thomas in Madras (Chennai). In Malacca he met a Japanese man who told him about the culture and beliefs in his home country. Francis wanted very much to go to Japan, to offer everyone the possibility to accept the Christian faith and be baptised. He managed to go to Japan, and even met the emperor. The great missionary finally died when he was on his way to China.

On his travels, Francis encountered many different religions, in particular Hinduism and Buddhism. The word yoga is used for various Hindu schools of spiritual and ascetic discipline, supported by physical exercises. Hinduism, with its many gods and spiritual customs, is very different from the unique Christian God of love, who wishes to share our lives. Obviously, as Catholics we cannot pray to the many Hindu gods. In Japan, Francis encountered zen, which refers to various Japanese schools of Buddhism. While for Christians the individual is important because each of us is created by God himself, in zen the aim is to go beyond the individual existence towards a growing awareness. A second element is the search for enlightenment or awakening: one can wake up to see what life is really about. The greatest difference with Catholicism is that zen focuses on the self rather than on God. Catholics search to be ever more open to God’s presence in their lives. Only then can they realise themselves fully.

So, in many ways, yoga and zen are incompatible with the Catholic faith. Although Francis was convinced that missionaries must adapt to local customs and language, he was critical of other religions. He feared that Christians might lose their faith, and with it, their soul and future with God. Some claim that it is possible to separate Hindu or Buddhist spirituality from the physical exercises. If that separation is truly possible, some of these exercises can be used for the physical well-being of a person. In fact, breath control, mental focus, and bodily postures are widely practised for health and relaxation, and are also known in Catholic spirituality. When this helps people in their Christian prayer, that is great! It is important, however, to avoid any mix of religions. Saint Francis would insist that Jesus Christ is the only sure path towards God. How can you best find him?

O God, who through the preaching of Saint Francis Xavier won many peoples to yourself, grant that the hearts of the faithful may burn with the same zeal for the faith and that Holy Church may everywhere rejoice in an abundance of offspring. Through our Lord Jesus Christ, your Son, who lives and reigns with you in the unity of the Holy Spirit, one God, for ever and ever.

What Happened When St Francis Xavier Went to India

Written by Jean Olwen Maynard in Saints of South Asia.

The first Jesuit missionary, St Francis Xavier, arrived in Goa in 1542 and used it as a base for travelling around the region. He is particularly remembered for consolidating the nascent Christianity of the Parava fishworkers who operated the pearl fisheries between Kanyakumari, at the southernmost tip of India, up to Tuticorin. The Paravas had readily agreed to be baptised in return for Portuguese protection from Muslim raiders, but before Fr Xavier’s arrival they hardly knew anything about the faith they’d committed themselves to. Fishing communities on the island of Mannar off Sri Lanka, hearing about his work among the Paravas, sent a message asking him to come and preach to them too: he was unable to go personally, but sent another priest instead. When in 1544 the King of Jaffna, infuriated with the Portuguese, decreed a crackdown on Christianity, the Mannar converts refused to renounce their new-found faith, and some six hundred men, women and children died as martyrs. After Fr Xavier’s death in the Far East, in 1552, his body was brought back and enshrined in Goa: he was canonised in 1622.