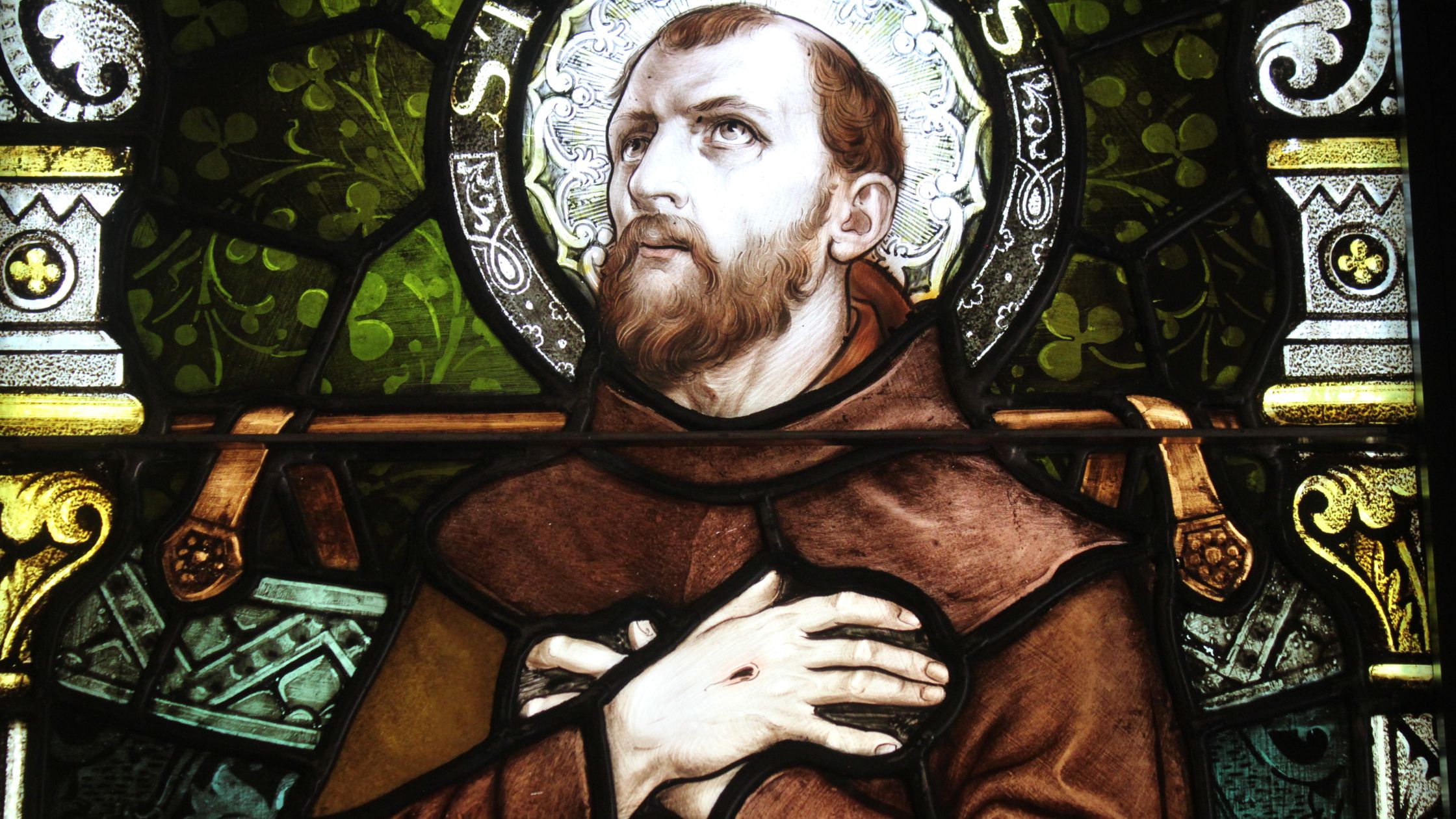 “We must hate our lower nature with its vices and sins; by living a worldly life, it would deprive us of the love of our Lord Jesus Christ and of eternal life.”

Francis was born into a silk merchant family in Assisi, Italy. As a young man he lived an extravagant life with beautiful silk clothes and accessories, while partying, squandering money on drink and girls, and playing practical jokes on people. In a whimsical search for adventure he enlisted as a soldier, and was taken prisoner. He spent a year as a captive. After his liberation, he felt depressed at the thought of picking up his frivolous life once more. The only moments of consolation were those of secret prayer in a corner of the church. One day, he met a leper on the road. Without thinking, he descended from his horse and embraced the man with the contagious disease, giving him what cash he had on him. In a deserted chapel, dedicated to San Damiano, he knelt before the icon of Jesus on the Cross. Here, he heard a voice telling him to repair God’s house. First, he thought that he was to restore the chapel, which was crumbling down. Then he realised that the entire Church community was crumbling down, and that preaching the faith was of the utmost importance. This discovery changed his life completely.

To his family’s shame, Francis began to live like a beggar, asking for alms and counting on God’s providence alone. He did not want to have any earthly possessions, and spoke with great joy to anyone he met about the love of God for every creature. So great was his love for God, that he even preached when no one was present, addressing his enthusiastic words to the animals he encountered in nature. He saw God’s splendour in people, animals, and nature alike. Soon, his example attracted followers, the first Franciscan friars. They lived by a simple Rule written by Francis, which focuses on poverty and preaching. Francis undertook various attempts to preach the gospel outside of Italy. He even tried to convert the Sultan of Egypt, and received permission to go to the Holy Land, where until today the Franciscans are in charge of the holy places as ‘Custodians of the Holy Land.’ Francis’s closeness to Jesus was clear in everything. Probably he is so universally loved precisely because he so closely resembled Jesus in his own life.

O God, by whose gift Saint Francis
was conformed to Christ in poverty and humility,
grant that, by walking in Francis’s footsteps,
we may follow your Son,
and, through joyful charity,
come to be united with you.
Through our Lord Jesus Christ, your Son,
who lives and reigns with you in the unity of the Holy Spirit,
one God, for ever and ever.

This account of the founding of the Franciscan order is written by Jennifer Moorcroft and is extracted from our booklet St Francis of Assisi.

Francis found himself drawn more and more to prayer, seeking out lonely spots where he could pray. During these long hours he gradually began to see the face of his beautiful lady – Lady Poverty. He became even more generous with his alms, but events showed him that poverty meant more than giving alms, or even giving away his clothes. Around this time he made a pilgrimage to Rome and was moved to pity by the sight of the many beggars there. One in particular caught his attention, one so worn down that he did not even have the will to beg. Francis gave him generous alms and was preparing to move away, then turned back. He had ridden to Rome on a magnificent horse, his clothes were of good stuff, although less flamboyant than before. By giving alms he was giving out of his abundance, especially as it was, after all, his father’s. Could he give of himself even more? Could he abandon his dream of being a prince among men, strip himself of his pride and vanity? Could he become the least of men – a beggar? With the impetuosity that characterised him, Francis acted at once, stripping off his good clothes and exchanging them for the beggar’s rags. He became a beggar for a day.

Francis’ greatest horror was disfigurement of any sort, but above all, of leprosy. One day, riding along the road, he came face to face with that greatest fear in the shape of a hideously deformed leper. His instinct was to turn his horse and gallop off, but instead he dismounted and approached the leper, giving him all the money he had on him. Then, in an even greater gesture, he swept the man up in his arms and embraced him. He then mounted his horse to continue his journey; turning back, the leper was nowhere to be seen.

There were many leper houses in the neighbourhood, and cured completely now of his aversion Francis took delight in working among those whom he called his fellow Christians.

Although he perhaps did not realise it at the time, Francis was undergoing a form of novitiate, moving from his old life into a new one. One day, he stopped to pray before a crucifix in a dilapidated church called San Damiano. Suddenly the Christ on the crucifix spoke to him, saying, ‘Francis, go and repair my house, which, as you can see, has fallen into ruin.’ Francis took the command literally. He would repair San Damiano. Of course that would mean money, and he had none of his own, but back in his father’s house were goods a-plenty. He went home and rolled up as much cloth as he could and set off for Foligno where he sold it all, as well as his horse, and offered the money to the priest to repair his church.

Very wisely, the priest, realising where the money had come from, refused to take it, so Francis flung it on the window ledge where it remained. His father, meanwhile, was beside himself with rage and came after his son. He was a hard and mercenary man, but perhaps deserves some sympathy. It would not be easy for any father to see his son, on whom he had pinned such hopes, going off the rails, as he saw it, throwing his father’s hard-earned money around, consorting with riff-raff and beggars, mooning around the place; perhaps he was, as some of the townsfolk were hinting, going mad.

Francis hid from his father for a whole month in a ditch by a friend’s house, but eventually had the courage to come out of hiding. By this time he looked so emaciated and bedraggled that the town urchins started to throw mud and stones at him and call him names. His father, horrified to find that it was his own son who was the butt of all this ridicule, dragged him back home and chained him up in a cellar.

Pietro eventually had to leave on business, and Pica took the opportunity to release her son, thus incurring her husband’s wrath and curses on his return. Pietro had had enough, and took Francis before the Bishop’s court to get back his money. The Bishop ordered Francis to repay the money, which he gladly did. Then, in a grandiose gesture, Francis stripped himself completely naked, saying ‘Until now I called Pietro Bernadone father, but now that I wish to serve God, I return him not only his money that he wants so much, but also the clothes I had from him.’ He flung the clothes on to the ground. ‘And now I can go forth naked before the Lord, saying that in all truth no longer is Pietro Bernadone my father, but my Father who is in heaven.’

Now Francis became a real beggar, going through the town with a big bowl in which people would put scraps of food.

He still had to ‘rebuild my Church’, and so, without money, Francis set to and begged for the stones he needed, many of which were thrown at him, together with jeers and mockery. Most commentators have said, rightly, that Francis mistook Our Lord’s meaning, that He wanted His Church to be reformed, not San Damiano to be rebuilt, but perhaps the Lord knew his ‘Little Man’ better than we. Francis began at the very beginning, one stone, one brick at a time. There were many people at the time, from the Pope down, who were intent on reforming the Church, which was sorely in need of it. The most urgent problem was the standard of the clergy, for if the leaders fail, then the people are shepherdless. Many priests were ill educated and illiterate, sometimes lazy and prone to sexual sin. The priest in charge of San Damiano was not one of them, but his church reflected the dismal state into which the Church had fallen.

It was appropriate, then, that Francis should start with an actual church, repairing it, clearing out the rubble and making it once again a fitting place for the worship of God. He went on to rebuild other churches, among them San Pietro, then just outside the city walls, and a little chapel in the woods, the Portiuncula.

The Order is born

It was in the Portiuncula that he received further guidance as to his vocation. Francis heard the Gospel read on the Feast of Saint Matthias, 24th February 1206, in which Jesus told his disciples, ‘As you go, proclaim that the kingdom of heaven is close at hand. Cure the sick, raise the dead, cleanse the lepers, cast out devils. You received without charge, give without charge. Provide yourselves with no gold or silver, not even with a few coppers for your purses, with no haversack for the journey or spare tunic or footwear or a staff, for a workman deserves his keep’. (Mt 10: 7-10)

Trembling with joy, Francis realised that the Lord was speaking directly to him and exclaimed, ‘This is what I wish, what I am seeking, this is what I long with all my heart to do.’ He went immediately to start preaching to the people with such joy, fervour and conviction that gradually the mockery began to die down and people began to listen to a message that spoke to their hearts, to their deepest need.