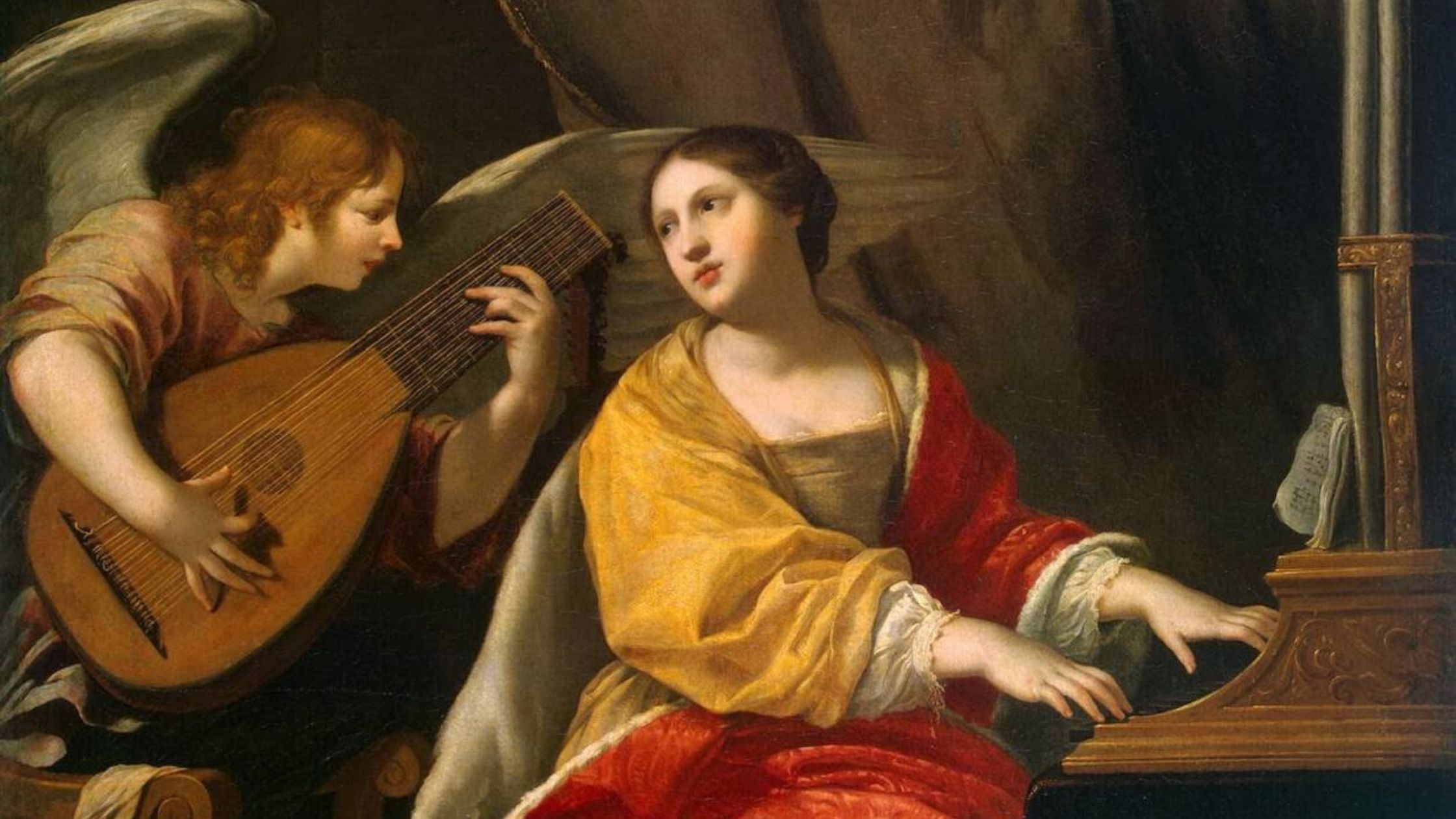 Music… gives a voice to the testimony of faith in Christ… The words of faith need deep inner silence, to listen to and obey a voice that is beyond the visible and tangible… Faith follows this deep voice wherever art itself alone cannot arrive: it follows this voice on the path of the witness, of offering oneself out of love, as did Cecilia. Then the most beautiful work of art, the masterpiece of the human being, is his every act of authentic love, from the smallest in daily martyrdom to the extreme sacrifice. Here life itself becomes a hymn: an anticipation of the symphony we shall sing together in heaven.

Who was St Cecilia?

Today’s saint is written by Julien Chilcott-Monk in Saints of the Roman Canon.

The identification of this virgin martyr is not without some difficulty. She may be an otherwise unknown martyr over whose house a church at Trastevere in Rome was erected as early as the third century. By the end of the fifth century, a church had been dedicated in her honour. However, the popular story (involving the conversion of her betrothed, Valerian, and his brother Tiburtius) seems to be no earlier than the fifth century. It may have been composed to explain the life of the unknown dedicatee of the church.

In this legendary biography, the men were condemned for their Christianity and for respectfully burying the bodies of Christian martyrs. They were beheaded along with Maximus, a Roman civil servant, who was converted by their example. Cecilia in turn buried their bodies and was then herself questioned and finally sentenced to death. Before she died, she made over the property to the pope (Pope Urban I, 220-230).

Pope Pascal I 817-824 had what he reckoned were the bodies of these four saints (Cecilia, Valerian, Tiburtius, Maximus) removed from the catacomb and translated to the church of St Cecilia where they remain. In the late sixteenth century, the supposed body of Cecilia was uncovered and before it succumbed to the atmosphere, the artist Moderno had made a detailed drawing on which his statue of Cecilia was subsequently modelled. This remarkable statue still lies in the church.

There was probably only ever one martyr by the name of Cecilia, who was associated in some way with the house that later became a church.

Cecilia is well-known as the patroness of musicians, and although this is probably based on a misunderstanding of a phrase in her biography, this does not seem to matter.

May the intercession of Cecilia and her companions instil in us unswerving dedication to Christ.

But now more steadfast do the virgins stand,
While tortures new are laid upon them,
Rejoicing that their bodies are afflicted
For everlasting glory, which they seek,
Seeing the joys of this world pass
And suddenly fade as flowers,
In such a virgin lot shone Cecilia,
As amidst lesser lights the day-star gleams.

Blest virgin, who didst bear all fearlessly,
And for that glory willingly didst die,
Devoutly intercede for us to God.

(Sequence, Common of Virgin Martyrs, from the Sarum Missal)

Pray for musicians, poets and artists.
St Cecilia, pray for us.

O God, who gladden us each year with the feast day of your handmaid Saint Cecilia, grant, we pray, that what has been devoutly handed down concerning her may offer us examples to imitate and proclaim the wonders worked in his servants by Christ your Son. Who lives and reigns with you in the unity of the Holy Spirit, one God, for ever and ever.

Is there a type of music that Christians shouldn’t listen to?

Extracted from our book Online With Saints by Fr Michel Remery.

Cecilia was a young girl from Rome, born in a Christian family at a time that Christians were often persecuted. Historically, not much is known, but her legend is a very intense example of faith. Cecilia loved Jesus so much that she promised him to remain a virgin during all her life. This was her way to keep her faith pure in the midst of the pagan culture of Rome. However, her parents married her off to a rich young man, Valerian, who was not a Christian. She was devastated: what was to come of her private vow to Jesus?

Cecilia did not give in to her despair, but spoke intensely to her future husband of her love for Jesus. Eventually Valerian asked to be baptised. He and his brother Tiburtius became fervent Christians. He respected the virginity of his wife and even took upon himself the dangerous task of burying Christians who were executed because of their faith. Not much later, the two brothers were arrested and executed. Cecilia had to bury her own husband. She did not lose her strong faith, and instead spoke about Jesus to everyone she met, resulting in the conversion of hundreds of people. She turned grief for her husband into a powerful urge to evangelise and speak about Jesus. Eventually, she too was arrested and put to death as a martyr for the faith.

So, how can Cecilia help us to answer the question? An ancient tradition says that on her wedding day ‘While the profane music of her wedding was heard, Cecilia was singing in her heart a hymn of love of Jesus, her true spouse.’ This ‘profane music’ was the music of the ancient Romans, who were serving the Roman gods while fighting the Christians with force. The only music Cecilia wanted to make and listen to was music that would praise God, her only true love! Even today, that argument is the most important element in choosing what music is good for you. Cecilia’s song is a good example of truly Christian music, as it praises God and speaks of Jesus’s love. Also today we need really good musicians who make great Christian music.

So, how you can discern the difference between bad and good music? We do not speak here of the lyrics alone or of the purely artistic quality. For starters, as long as it is true music, it can serve to praise God. The keyword for true music is beauty.

This means that in principle every style of music can be good. Obviously, certain styles of music are better suited than others, for example, for the liturgy or quiet prayer. An important point is the effect the music has on you, for music can be something very powerful. You’ll like to make conscious choices here too. A good question to ask is: ‘What does this music do: does it bring me closer to God, or does it, for example, arouse me physically or give me strange thoughts?’ So, there is no reason that music would be devilish or unworthy simply because it is modern. Neither modern nor ancient music are automatically bad, but discernment is necessary. Christian words, music, or melodies help you grow in your relationship with God. What is truly Christian music for you? 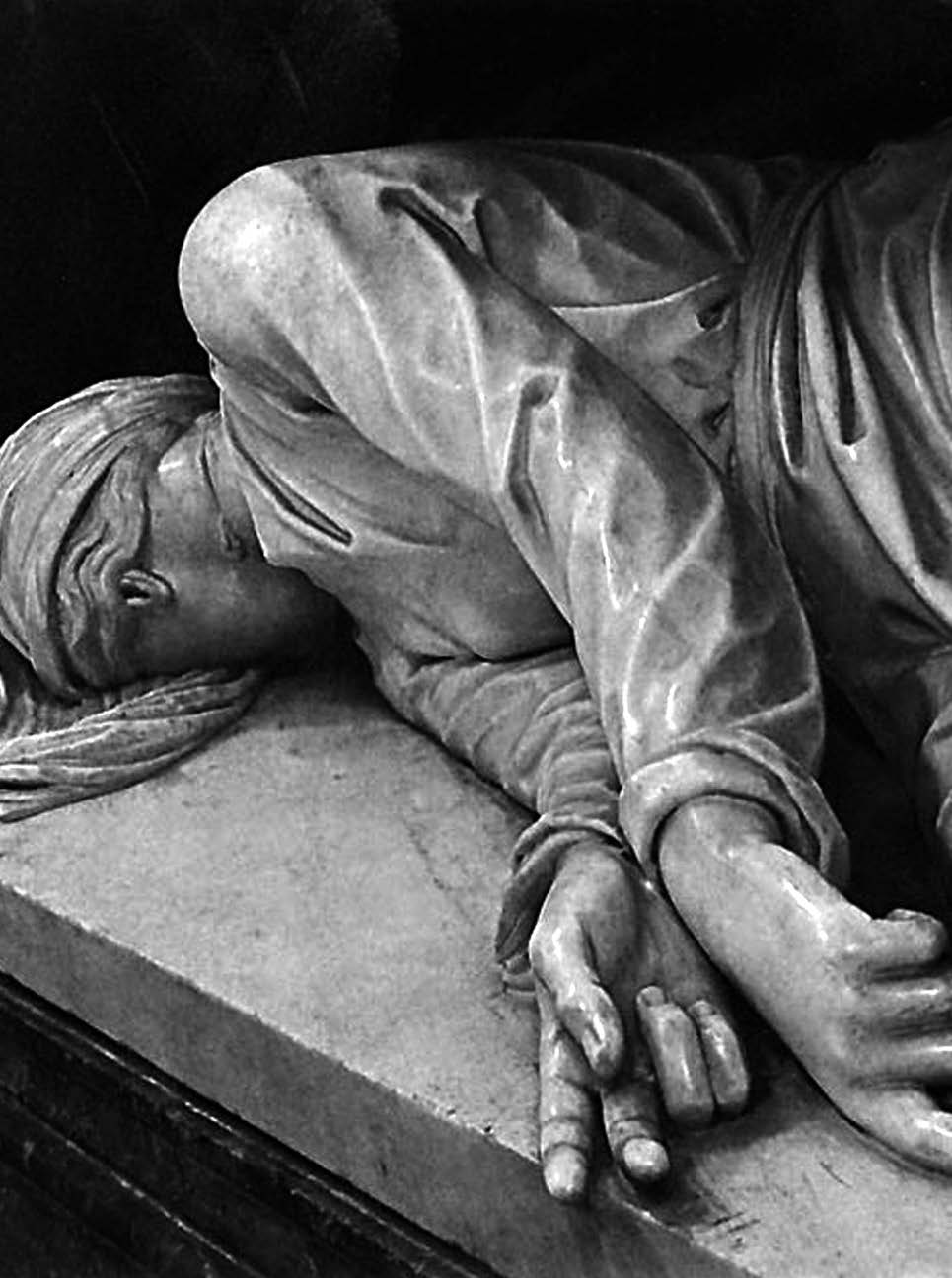 Statue of St Cecilia, Church of St Cecilia in Trastevere and Catacombs of St Callistus. As featured in Rome: A Pilgrim’s Companion.