This blog offers an in-depth guide for praying the rosary. If you are looking for a practical “how-to” guide, use this quick guide.

The Holy Rosary is both meditation and supplication. Certain simple prayers are said while the mind and heart dwell on particular incidents of the life and death of our Lord Jesus Christ and his mother, Mary.

These incidents in the lives of Jesus and Mary are set out in twenty named ‘mysteries’. These are presented in four groups of five ‘mysteries’ each, which recall many significant events from the Gospels and of our salvation story.

Thus there are five ‘Joyful mysteries’ marked by the joy radiating from the event of the Incarnation, recalling the infancy and hidden ministry of Jesus. There are five ‘Mysteries of Light’ (or ‘Luminous mysteries’), recalling how Jesus in the years of his public life proclaiming the kingdom of God, truly emerges as ‘the light of the world’. Then there are five ‘Sorrowful mysteries’, which focus on the individual moments of the Passion and death of our Lord, revealing the culmination of God’s love. Finally, there are five ‘Glorious mysteries’, which invite us to pass beyond death in order to gaze upon Christ’s glory in the new life of the resurrection, and to relive the joy of the apostles and of Mary. In so doing we rediscover the reasons for our own faith.

Added to this circle, is a smaller, single group of five beads, at the end of which is usually attached a small crucifix. These beads mark the different prayers said during the Rosary. The beads grouped into tens are the ‘Hail Marys’, when the Hail Mary prayer is repeated ten times during each ‘decade’. The beginning and end of each decade is marked by the other single bead, which both indicates when the ‘Our Father’ is said at the start of a decade, and the ‘Glory Be’ at the close of a decade.

Also popular is the use of a rosary ‘ring’, small enough to fit comfortably on the finger. The rosary ring carries only one ‘decade’ of ten small grooves or notches, with a small dividing marker, often in the form of a cross.

Praying the Mysteries of the Rosary

To pray the Rosary usually means to pray ‘five decades’ of the Rosary, and so involves saying the ‘Our Father’, followed by ten ‘Hail Marys’ and then the ‘Glory Be’ – this is repeated five times altogether. While marking each prayer that is being said by passing the beads through the fingers, time is given to meditating on the particular theme attached to each of the ‘decades’ being prayed. These themes are described in ‘the five mysteries’ chosen, whether the Joyful, Luminous, Sorrowful or Glorious mysteries. If you choose the Joyful mysteries, for example, the first of the five mysteries, The Annunciation, is the theme to meditate on during the first decade. The second mystery, The Visitation, attaches to the second decade, and so on until the fifth mystery and decade.

Aids to saying the Rosary

Announcing each ‘mystery’ is important, as the words direct the imagination and mind towards a particular episode in the life of Christ, opening up a scenario to focus our attention. It is often helpful to use icons and holy images to help to do this, and this corresponds to the inner logic of the Incarnation, that is, they are concrete aids to prayer. It is also most helpful to follow the announcement with the proclamation of a relevant scripture passage, providing a biblical foundation and greater depth to our meditation. So God is allowed to speak and we listen in silence.

Customs attached to the Rosary

Whereas the usual practice is that people tend to say one set of mysteries on given days of the week, some people may wish to pray all of these four sets of mysteries together. In that case, after the Joyful mysteries the round of beads is said a further time, while the Luminous mysteries are contemplated, and thereafter the Sorrowful and Glorious mysteries too.

In current practice the ‘Glory be’ between each decade, is followed by a short concluding prayer, which varies according to local custom. A popular prayer often used is the ‘Fatima Prayer’.

There is also a popular custom of expressing particular ‘intentions’ to be prayed for during the recitation of the Rosary, commonly prior to each new decade. These intentions may touch on a range of concerns affecting the Church and the world, or be of a more personal and immediate nature.

A variety of customs exist concerning the practical recitation of the Rosary. Where two or more pray the Rosary together, they may choose one to ‘lead’ each decade – that is, the one leading announces the mystery (and an ‘intention’ if appropriate) and says the first part of each prayer, to which the others respond with the second part. Alternatively, they may take it in turns to ‘lead’ and to respond; similar arrangements can be made for larger groups.

Traditionally, different mysteries of the Rosary have been allocated to different days of the week. There are no strict rules, but a recommended practice is as follows:

Beginning and ending the Rosary

At present, in different parts of the Church there are many ways to introduce the Rosary, some including the saying of the Creed as if to make the profession of faith the basis of the contemplative journey about to be undertaken.

The Rosary usually begins with prayers for the intentions of The Pope, as if to expand the vision of the one praying to embrace all the needs of the Church.

The small, single group of five beads (at the end of which is usually attached a small crucifix) normally indicates these additional prayers, which are usually said at the beginning of the Rosary.

The conclusion of the Rosary

Since the Rosary is truly a spiritual itinerary in which Mary acts as Mother, Teacher and Guide, it concludes with the opportunity for the grateful heart to burst forth in praise of the Blessed Virgin by praying either the ‘Hail Holy Queen’ (Salve Regina) or the Litany of Loreto. The choice of some of these prayers is guided by the liturgical season.

To pray the Rosary is nothing other than to contemplate with Mary the face of Christ.

I. The Joyful Mysteries

1. The Annunciation;
2. The Visitation;
3. The Nativity;
4. The Presentation in the Temple;
5. The Finding of the Child Jesus in the Temple.

II. The Mysteries of Light

1. The Baptism in the Jordan;
2. The Wedding at Cana;
3. The Proclamation of the Kingdom of God;
4. The Transfiguration;
5. The Institution of the Eucharist.

1. The Agony in the Garden;
2. The Scourging at the Pillar;
3. The Crowning with Thorns;
4. The Carrying of the Cross;
5. The Crucifixion and Death of our Lord. 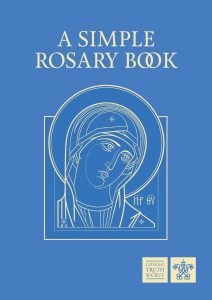 This blog is exracted from A Simple Rosary Book. Designed for those familiar with the prayer as well as for newcomers, this text clearly explains how to pray the Rosary. Prayers and Scripture passages associated with the Rosary are also included.

Support the mission of CTS and learn more about the rosary, by ordering your copy of A Simple Rosary Book here. 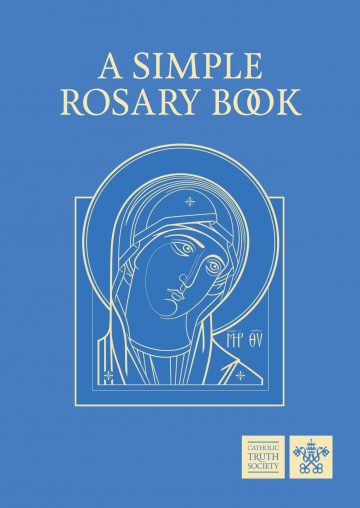