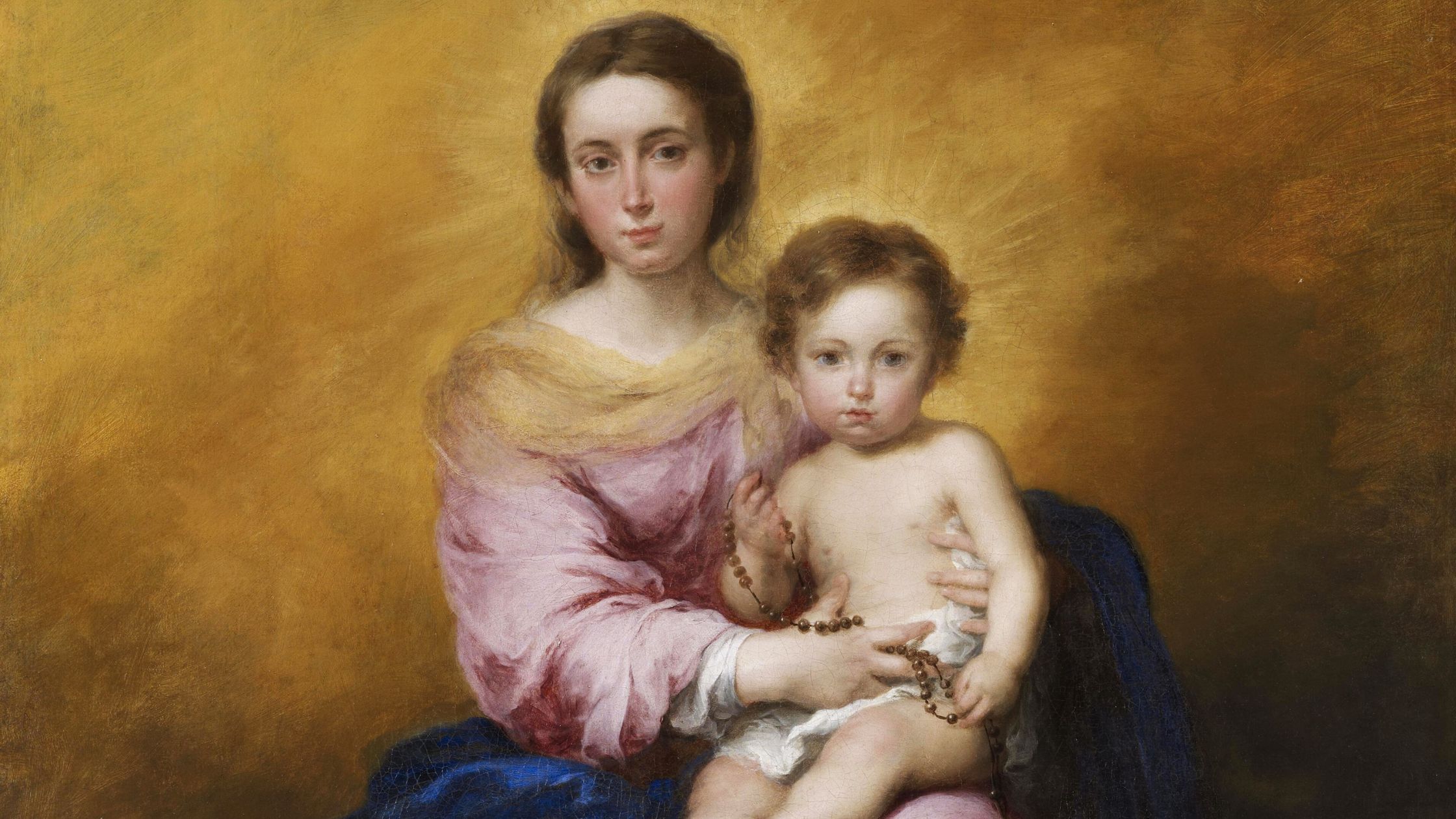 “Some people are so foolish that they think they can go through life without the help of the Blessed Mother. Love the Madonna and pray the rosary, for her Rosary is the weapon against the evils of the world today. All graces given by God pass through the Blessed Mother.”

Our Lady of the Rosary – Feast: 7th October

This Memorial (originally Our Lady of Victories) commemorates the battle of Lepanto (7th October 1571), when a Christian fleet defeated the Turks. The victory was attributed by Pope St Pius V to the recitation of the Holy Rosary. This great Marian prayer is sometimes traced back to St Dominic and his confrères, preaching against the Albigensian heresy in the thirteenth century, although it seems more likely to have taken its familiar form in the fifteenth century. Since then it has spread all over the world and has produced marvellous fruits, bringing countless Christians ‘to Jesus through Mary.’

Pour forth, we beseech you, O Lord,
your grace into our hearts,
that we, to whom the Incarnation of Christ your Son
was made known by the message of an Angel,
may, through the intercession of the Blessed Virgin Mary,
by his Passion and Cross
be brought to the glory of his Resurrection.
Who lives and reigns with you in the unity of the Holy Spirit,
one God, for ever and ever.

How the Rosary Leads Us to Christ

This account of the founding of the Franciscan order is written by Fr Guy Nicholls and is extracted from our booklet Praying a Scriptural Rosary.

Although the Rosary is closely associated with our Lady, and justly so, it is principally a systematic meditation on the Incarnation and work of her Son, our Lord Jesus Christ. In the Rosary, we contemplate Emmanuel, God-with-us, as he was born of the Virgin Mary, as he ministered in Galilee and Judaea, as he suffered and died in Jerusalem and as he was raised to new life and to heavenly glory which he shares with us first through the outpouring of the Holy Spirit and also by the promise and foretaste of eternal life with him in heaven, which our Lady already fully shares there with him.

Understanding the Mysteries of the Rosary

These meditations are inspired by twenty distinct episodes, the ‘mysteries of the Rosary’ as they are called, on each of which we reflect in turn, doing so in the company of the Blessed Mother of God. So complete is the range of the mysteries in which we ponder the journey of Christ’s life, death and resurrection in the Rosary that Pope St Paul VI, borrowing a phrase from Pope Pius XII, described it as a ‘compendium of the entire Gospel’. So central is the role which we invite our Lady to exercise with us on this journey that Pope St John Paul II summed up the entire Rosary as contemplating the Face of Christ with Mary.

But what do we mean by the word ‘mysteries’ with reference to the prayer of the Rosary? In the Christian tradition, the word ‘mystery’ refers to God’s grace which, though hidden from our senses, is nonetheless powerfully alive and active in us spiritually. ‘Mystery’ has a related meaning in connection with the Faith, referring to particular truths which God has revealed, and which surpass our powers of full comprehension, such as the Blessed Trinity, the Incarnation of the Son of God as man, or the real presence of Christ in the Blessed Sacrament under the outward appearances of bread and wine. Yet although we cannot fully grasp such realities because they far surpass our power to understand them completely, we are nonetheless given the grace and power to understand them sufficiently to be able to enter into their inner reality beyond our natural power of comprehension. In this way God grants us an insight into his loving way of dealing with us by drawing us into an ever greater and more fruitful union with himself. ‘Mystery’ as we use the word in the Rosary describes an event into which we enter spiritually by pondering it and using it to enrich our prayer so as to bring us into closer union with Christ the Son of God and Redeemer of the entire human race.

Jesus is at the heart of every mystery

We can take note that our Lord is at the heart of every mystery, and as we consider each in turn we will see just how that is so. But we will also find out by praying each of these mysteries in company with our Lord’s Mother, just how she is present to us and how she points us towards him, how she teaches us to see him as though with her own eyes of perfect faith, hope and love.

In the Joyful Mysteries we enter with Mary into five events “marked by the joy radiating from the event of the Incarnation”.4 In all five of these events Scripture shows us the vitally important part that our Lady plays in bringing about her Son’s presence in the world and in his growth towards human maturity.

In the Mysteries of Light we come into the presence of Christ in his public ministry, the ‘light of the world’ (Jn 8:12) who proclaims the Gospel of God’s Kingdom which is now present in the world in himself, above all as he manifests his glory in the Transfiguration and as he gives us his Body and Blood in the Eucharist. In these events, although Scripture does not tell us that our Lady was present in all as she was in the joyful mysteries, nonetheless her presence at the wedding in Cana, and her providential role there in bringing about her Son’s first great sign, becomes an important indication to us of the importance of her quiet and undemonstrative presence in the background of her Son’s ministry and her role in mediating between her Son and all who need his divine intervention, who need to be taught how to ask for it.

In the Sorrowful Mysteries, Scripture tells us of Mary’s presence in the culminating event of them all: the crucifixion and death of her Son, in which she shares in a singular way in the work which he here accomplishes. Here at Calvary where she received us as her children at the foot of her Son’s Cross, and so took upon herself the care of us as her own children, she continually helps us to understand what it means for each one of us to take up our cross daily and follow Christ.

Finally, in the Glorious Mysteries, our Lady’s presence is explicitly witnessed by Scripture in the event of the Descent of the Holy Spirit at Pentecost, but Scripture also shows in a hidden way her presence in glory at the end of her life on earth, when her Son brings her to share fully in his triumphal and glorious entry to heaven, just as she had shared faithfully in his suffering and Cross. 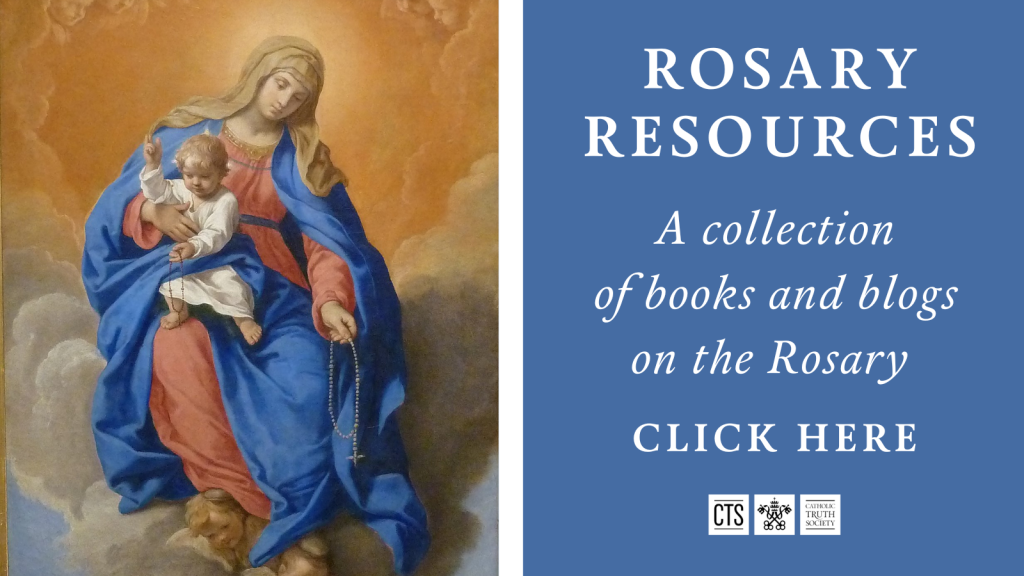