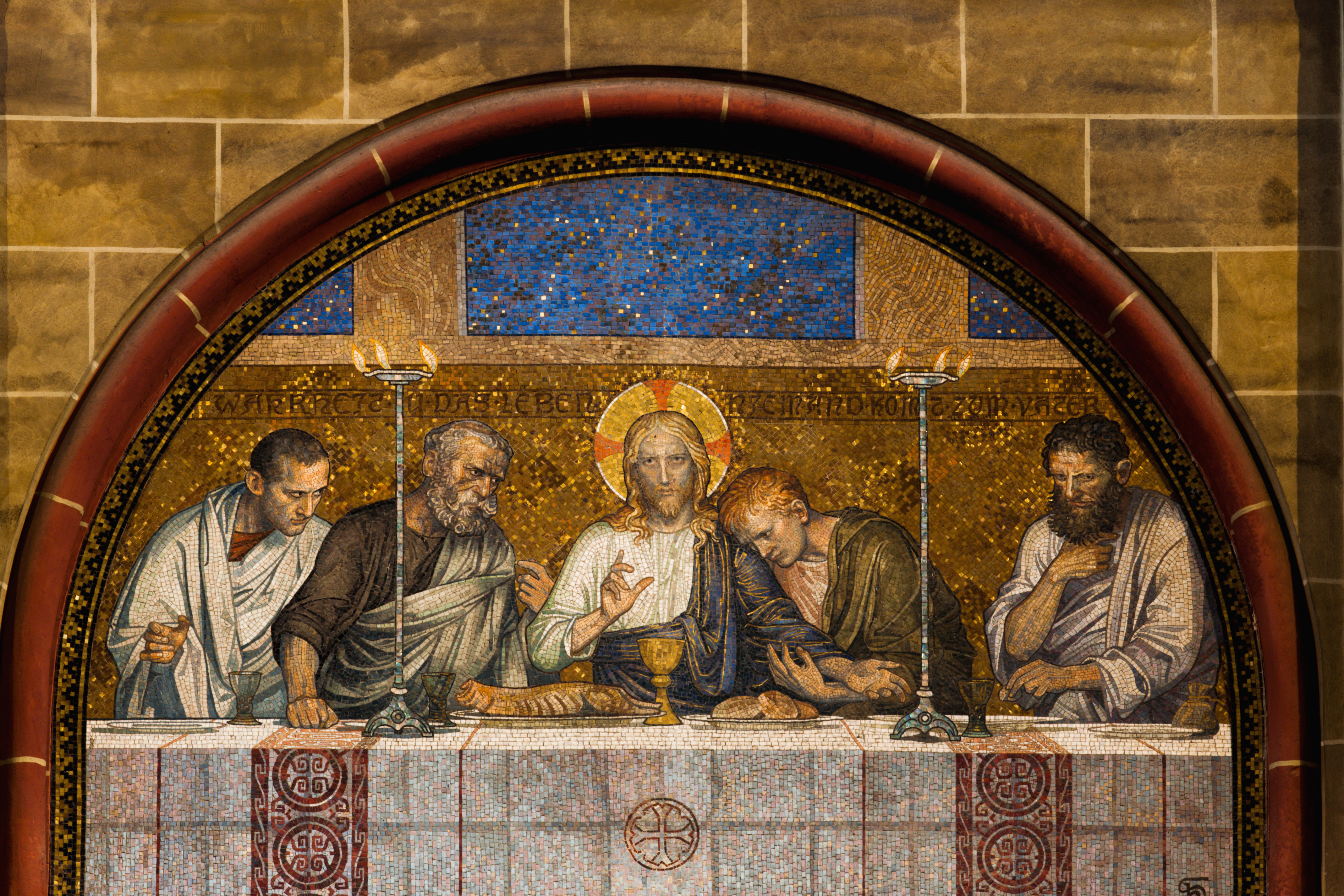 The old name for the Wednesday of Holy Week is “Spy Wednesday”, a reference to the traitor Judas. The ceremonies of the final days of Holy Week are known as the Easter Triduum because they take place over three days, with the events of Holy Thursday, Good Friday and then Easter. Thursday is known as Holy Thursday. It is the day when we remember the Last Supper. It is a special day for praying for priests.

“And as they were eating, he took the bread, and blessed, and broke it, and gave it to them and said: ‘Take; this is my body.’ And he took a cup, and when her had given thanks he gave it to them, and they all drank of it. And he said to them, ‘This is my blood of the covenant, which is poured out for many…’” (Mk 14:22-23)

The Chrism Mass is usually held on the morning of Holy Thursday, although in some dioceses it is held earlier in the week. It is open to everyone and is usually very crowded as people come to pray for their priests and to support them. A recent innovation has been giving small cards of appreciation to priests on this day. In some places, people gather outside the Cathedral to show their appreciation to their priests: as the procession, led by the Bishop approaches, people applaud and even hold up “Thank you” placards.

Holy Thursday is also known as Maundy Thursday. Why “Maundy”? It’s an old English word, which comes from the Latin, mandatum, which also gives us the word “command”. What is the command that we are given on Maundy Thursday? It is the great command that Christ gave to his Apostles on the night of the Last Supper: that we must love one another.

To show this love and the spirit of service which is at its heart, Christ washed the feet of his Apostles before supper began. This is still done in Catholic churches around the world. The Pope in Rome ceremonially washes the feet of twelve men, and you can watch this on the internet or on a Catholic television network.

In a longstanding tradition, in past times the Kings and Queens of England washed the feet of twelve poor men on Maundy Thursday, and gave them gifts of money and clothing. Today, this tradition is still honoured in the “Royal Maundy”. The Queen attends a special church service, and distributes “Maundy money”, specially minted coins that are placed in red and white bags or boxes bearing the royal cipher. Why red and white? These are chosen to represent the blood and water that flowed from the side of Christ on Calvary. The last monarch who actually washed people’s feet was James II who ruled from 1685 to 1688.

The Royal Maundy is carried out at a different church or cathedral each year. The Queen is accompanied by Yeoman of the Guard in their traditional costumes, and she is presented with a posy of flowers and herbs. The men and women chosen to receive “Maundy money” usually include people who have done some service in the community and merit this special honour. The number is linked to the Queen’s age. The money, one coin of each denomination, specially minted, is in fact legal currency, (but rarely spent in shops) and usually becomes a cherished family heirloom.

Why not distribute Maundy money in your family? Sort through your change, and find one coin of each denomination. Polish the coins up with metal polish, and put them in a presentation box or envelope with a holy picture, marked with the date. You could add a short explanation about the Maundy tradition. The coins could be given out at suppertime.

In Rome, the Pope also carries out the Mandatum, by actually washing the feet of twelve men and women in a ceremony in St Peter’s Basilica. He kneels before each person, and pours water from a great silver ewer on to the person’s feet, then wipes them with a linen towel, while a choir sings. It is a moving and impressive ceremony, which has been carried out for centuries and takes us right back to the night of the Last Supper. It can be seen online.

The Mandatum is also carried out in ordinary Catholic parishes. The priest will ceremonially wash the feet of twelve people of the parish, who take their places on the sanctuary for this at the start of Mass. The chants and prayers remind us of Christ’s commandment and the importance of love: “Ubi caritas…”

The Mass on Holy Thursday is the Mass of the Last Supper. At the start of the Gloria, all the bells in the church are rung. They will not be heard again until they ring with the joy of the Resurrection on Easter Sunday.  During the solemn hours of Holy Thursday and Good Friday, a wooden clapper is used instead at the points in the Mass when a bell would usually be rung.

There is an old legend that all the bells fly to Rome on the night of Holy Thursday, where they are blessed by the Holy Father. They fly back to the churches in time to be rung joyfully for the first Mass of Easter.

The scripture readings take us back to the night of the Passover, describing the ritual meal that was to be eaten, and the blood of the sacrificed animal that was to be sprinkled on the doorways.

Holy Thursday links us to the Jewish Passover. The Passover feast celebrates how, when the Jewish people were enslaved in Egypt, God brought them their freedom. He gave them a great leader, Moses, who would bring them out of slavery and take them towards the Promised Land. On the night of the Passover, the Jewish people had to eat a special meal.

“This month shall be for you the beginning of months; it shall be the first month of the year for you. Tell all the congregation of Israel that on the tenth day of this month they shall take every man a lamb according to their fathers’ houses, a lamb for every household…Your lamb shall be without blemish, a male a year old, you shall take it from the sheep or from the goats; and you shall keep it until the fourteenth day of this month, when the whole assembly of the congregation of Israel shall kill their lambs in the evening. Then they shall take some of the blood, and put it on the two doorposts and the lintel of the houses in which they eat them. They shall eat the flesh that night, roasted; with unleavened bread and bitter herbs they shall eat it…” (Ex 12:1-9)

Every year, faithful Jewish people honour the Passover, and remember their covenant with God. We too listen to the scripture reading from the Book of Exodus, and on this holy night at Mass we know that Christ is our Passover Lamb, who offers redemption to all from the slavery of sin.

As the Mass ends, the Blessed Sacrament is taken in procession to an Altar of Repose. This is in a side-chapel, which has been specially decorated with flowers and candles. Here, we can keep watch with Christ, remembering his agony in the garden of Gethsemane. Another tradition is to visit different churches and to pray at the Altar of Repose in each one.

Meanwhile, the main altar of the church is completely stripped – the candles and the altar cloths are taken away, the sanctuary lamp is snuffed out, everything is left bleak and bare. We are reminded of Christ being stripped of his garments when he was nailed to the Cross.

Because of Holy Thursday, every Thursday is a day that commemorates the Last Supper and is dedicated in a special sense to the Eucharist. Many parishes have adoration of the Eucharist all day on Thursdays, with people attending the church for an hour or more, and praying, on that day.

Some families eat a Passover-style supper on Holy Thursday, with roast lamb flavoured with rosemary and accompanied by horseradish (remembering the “bitter herbs” mentioned in the scriptures). You could look up Jewish Passover traditions on the internet and do something with your own family. 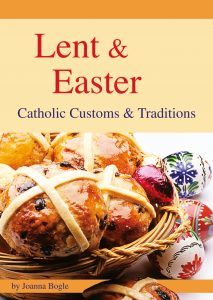 This blog is extracted from our ebook Lent and Easter. This booklet describes the rich heritage of customs and traditions long practiced by Catholics down the ages, up to today and how the liturgy in turn enriches their meaning.

Download Lent and Easter from your preferred ebook platform. 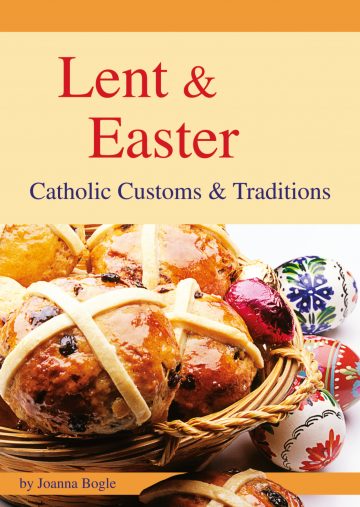