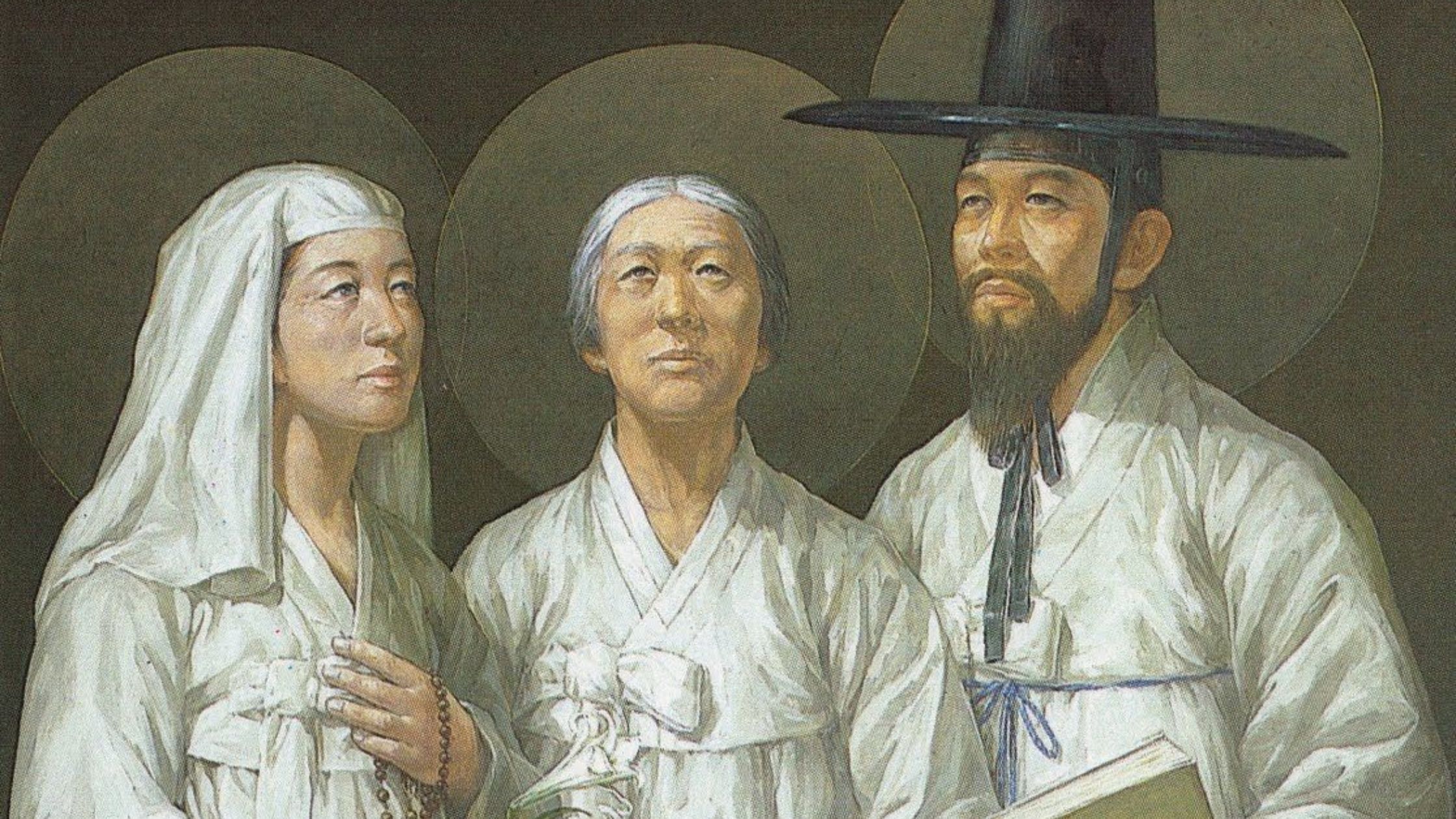 This is my last hour of life, listen to me attentively: if I have held communication with foreigners, it has been for my religion and for my God. It is for him that I die. My immortal life is on the point of beginning. Become Christians if you wish to be happy after death, because God has eternal chastisements in store for those who have refused to know him.

Today’s feast is written by Fr Nicholas Schofield in Saints of the Roman Calendar.

The Korean Martyrs testify to the presence of the faith in that region from the eighteenth century and the terrible persecutions during the nineteenth century. Outstanding among them were St Andrew Kim Tae-gon (1821-1846), the first Korean-born priest who was tortured and beheaded near Seoul in 1846, and St Paul Chong Ha-sang (c.1794-1839), a lay catechist who was crucified on 22 September 1839. More than 8,000 Christians from all walks of life lost their lives during the persecution and 103 of them were canonised in 1994.

O God, who have been pleased to increase
your adopted children in all the world,
and who made the blood of the Martyrs
Saint Andrew Kim Tae-goˇn and his companions
a most fruitful seed of Christians,
grant that we may be defended by their help
and profit always from their example.
Through our Lord Jesus Christ, your Son,
who lives and reigns with you in the unity of the Holy Spirit,
one God, for ever and ever.

The Korean Church is founded on the missionary work of lay people. In the 18th century, some Catholic books were imported from China and studied by Korean scholars. Some were struck by what they discovered. In 1784 one of them went to Beijing to study the faith and was baptised as Peter. He went back to Korea and his faith was so inspiring that many followed his lead and asked to be baptised. When, many years later, a Catholic priest arrived, he met thousands of Catholics. They had never seen a priest, and were thrilled with his arrival. The local rulers did not like Christianity and considered it a foreign influence. Many Christians were martyred in horrid persecutions. But their number kept growing. The first Korean to be ordained a priest was Andrew Kim Taegon. He was executed a year later, just as thousands of others were in the course of that century. 103 of them were officially declared martyrs for the faith.

The 103 Korean martyrs remind us that faith makes us strong and steadfast in love. They were radical in their choice for Jesus, and died cruel deaths as a consequence. Each of these martyrs served their country with great love, trying to bring their people what was most needed, namely the truth and love of Jesus. They all faced persecution as a consequence of their stance for the truth.

In spite of their patriotism, they placed their love for Jesus and the Church above everything else. Patriotism is love for one’s country or origin, which can be very good. That is different from ideologised nationalism, which is often based on a sense of superiority and in extreme cases even hatred of the other. Such dangerous ideas can lead to religious fundamentalism among other things. The Korean Martyrs, and saints like Patrick, Joan of Arc, and Thomas More show that this behaviour is completely opposite to the view of Christianity. Jesus calls us to be radical in love alone, and to bring the truth about him to all people wherever they are and whatever their origin or nationality. Do you love and pray for your country?