When Pope Benedict began his pontificate, he adopted the tradition of putting a fairly large crucifix in the centre of the altar when celebrating Mass. This annoyed a lot of people because it blocked their view of the Pope. They had come all this way to Rome and they couldn’t see him. And this was the very point of doing it! Not to annoy people, but to remind them that the love of Jesus Christ on the cross is the centre of our Christian faith, and the centre of the Mass. We need to keep our focus constantly on him.

Catholic tradition speaks about “the Holy Sacrifice of the Mass.” The Eucharist is more than a community meeting, more than a Liturgy of the Word, more than a communion service. It is also a sacrifice. But if Jesus died on the cross, and “by a single offering has perfected for all time those who are sanctified” (Heb 10:14), how can there be another sacrifice? Does it mean his death on the cross was insufficient? Are we still waiting for our salvation to be accomplished?

The Church teaches that the Mass is a true and proper sacrifice, not because it is independent of the cross, but because it re-presents the very sacrifice that Christ offered on the cross, and applies its power. We hear the language of sacrifice in the words of consecration that Jesus spoke at the Last Supper. He said, “This is my body which is given for you”, and “This cup that is poured out for you is the new covenant in my blood.” The sacrifice of Christ and the sacrifice of the Eucharist are one single sacrifice.

Jesus cannot die again, but we can be brought sacramentally into the presence of his saving death on the cross. We are united with the offering of Jesus on the cross and therefore with his eternal offering. The Eucharist is a memorial in the most profound sense because it makes a past event present for us today, and allows its effects to touch us today. This has so many implications.

It means we are brought close to the merciful love of Christ on the cross. We could not be there two thousand years ago but we can be there through the Mass. This should fill us with awe and wonder. The Mass is the holiest place on earth. There is no distance between us and our loving Saviour.

It means that even though salvation has been won for us, once and for all, on the cross, the effects of this salvation – the benefits, the graces, the fruits – are shared with us today through the Mass. The new covenant is renewed in an “un-bloody manner”. The sacrifice of the Eucharist is an effective sacrifice, it allows our redemption to be accomplished, and brings graces for the living and the dead. It is a “sacrifice of propitiation” because it brings forgiveness for our daily sins.

It means that we can offer our lives, with Christ, to the Father through the Holy Spirit. My life can become part of his offering on the cross, and in this way my life can become a life-giving sacrifice of love.

This blog is an extract from Meeting Christ in the Eucharist. 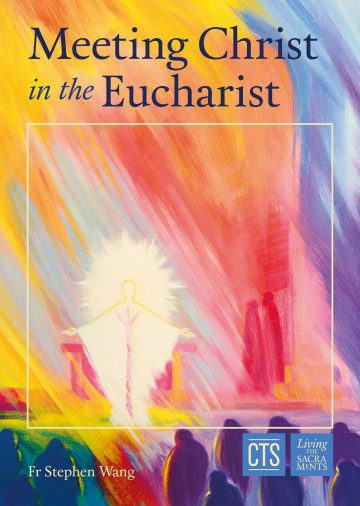