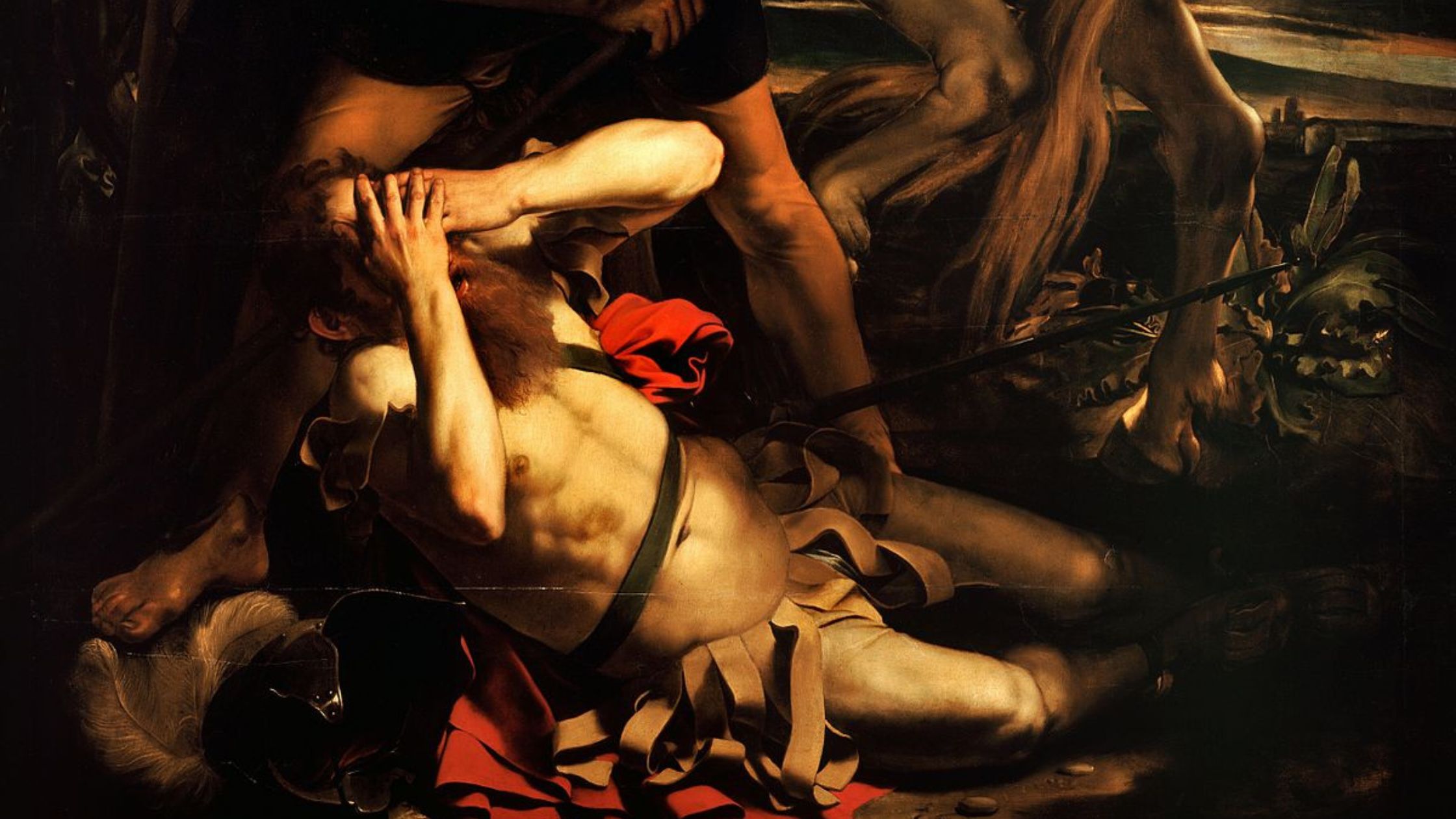 “To be separated from the love of Christ was, in Paul’s eyes, the greatest and most extraordinary of torments; the pain of that loss would alone have been hell, and endless, unbearable torture.”

What is the feast of the Conversion of St Paul?

This Feast commemorates the conversion of Saul of Tarsus while he was on his way to Damascus to persecute Christians. He was blinded by a light and thrown from his horse to the ground, hearing the words, ‘Saul, Saul, why do you persecute me?’ As Pope Benedict XVI wrote, ‘the Risen One spoke to Paul, called him to the apostolate and made him a true Apostle, a witness of the Resurrection, with the specific task of proclaiming the Gospel to the Gentiles, to the Graeco-Roman world.’

Collect for the Conversion of St Paul

O God, who taught the whole world through the preaching of the blessed Apostle Paul, draw us, we pray, nearer to you through the example of him whose conversion we celebrate today, and so make us witnesses to your truth in the world. Through our Lord Jesus Christ, your Son, who lives and reigns with you in the unity of the Holy Spirit, one God, for ever and ever.

Pope Benedict XVI on the Conversion of St Paul

Originally published in the CTS publication Paul of Tarsus.

It was precisely on the road to Damascus, at the beginning of the 30s in the first century and after a period in which he had persecuted the Church that the decisive moment in Paul’s life occurred. Much has been written about it and naturally from different points of view. It is certain that he reached a turning point there, indeed a reversal of perspective. And so he began, unexpectedly, to consider as “loss” and “refuse” all that had earlier constituted his greatest ideal, as it were the raison d’être of his life (cf. Ph 3:7-8). What had happened?

In this regard we have two types of source. The first kind, the best known, consists of the accounts we owe to the pen of Luke, who tells of the event at least three times in the Acts of the Apostles (cf. 9:1-19; 22:3-21; 26:4-23). The average reader may be tempted to linger too long on certain details, such as the light in the sky, falling to the ground, the voice that called him, his new condition of blindness, his healing like scales falling from his eyes and the fast that he made. But all these details refer to the heart of the event: the Risen Christ appears as a brilliant light and speaks to Saul, transforms his thinking and his entire life. The dazzling radiance of the Risen Christ blinds him; thus what was his inner reality is also outwardly apparent, his blindness to the truth, to the light that is Christ. And then his definitive “yes” to Christ in Baptism restores his sight and makes him really see.

In the ancient Church Baptism was also called “illumination”, because this Sacrament gives light; it truly makes one see. In Paul what is pointed out theologically was also brought about physically: healed of his inner blindness, he sees clearly. Thus St Paul was not transformed by a thought but by an event, by the irresistible presence of the Risen One whom subsequently he would never be able to doubt, so powerful had been the evidence of the event, of this encounter. It radically changed Paul’s life in a fundamental way; in this sense one can and must speak of a conversion. This encounter is the centre St Luke’s account for which it is very probable that he used an account that may well have originated in the community of Damascus. This is suggested by the local colour, provided by Ananias’ presence and by the names, of both the street and the owner of the house in which Paul stayed (Ac 9:11).

The second type of source concerning the conversion consists in St Paul’s actual Letters. He never spoke of this event in detail, I think because he presumed that everyone knew the essentials of his story: everyone knew that from being a persecutor he had been transformed into a fervent apostle of Christ. And this had not happened after his own reflection, but after a powerful event, an encounter with the Risen One. Even without speaking in detail, he speaks on various occasions of this most important event, that, in other words, he too is a witness of the Resurrection of Jesus, the revelation of which he received directly from Jesus, together with his apostolic mission. The clearest text found is in his narrative of what constitutes the centre of salvation history: the death and Resurrection of Jesus and his appearances to witnesses (cf. 1 Co 15). In the words of the ancient tradition, which he too received from the Church of Jerusalem, he says that Jesus died on the Cross, was buried and after the Resurrection appeared risen first to Cephas, that is Peter, then to the Twelve, then to 500 brethren, most of whom were still alive at Paul’s time, then to James and then to all the Apostles. And to this account handed down by tradition he adds, “Last of all… he appeared also to me” (1 Co 15:8). Thus he makes it clear that this is the foundation of his apostolate and of his new life. There are also other texts in which the same thing appears: “Jesus Christ our Lord, through whom we have received grace and apostleship” (cf. Rm 1:4-5); and further: “Have I not seen Jesus Our Lord?” (1 Co 9:1), words with which he alludes to something that everyone knows. And lastly, the most widely known text is read in Galatians: “But when he who had set me apart before I was born, and had called me through his grace, was pleased to reveal his Son to me, in order that I might preach him among the Gentiles, I did not confer with flesh and blood, nor did I go up to Jerusalem to those who were Apostles before me, but I went away into Arabia; and again I returned to Damascus” (1:15-17). In this “self-apology” he definitely stresses that he is a true witness of the Risen One, that he has received his own mission directly from the Risen One.

Thus we can see that the two sources, the Acts of the Apostles and the Letters of St Paul, converge and agree on the fundamental point: the Risen One spoke to Paul, called him to the apostolate and made him a true Apostle, a witness of the Resurrection, with the specific task of proclaiming the Gospel to the Gentiles, to the Greco-Roman world. And at the same time, Paul learned that despite the immediacy of his relationship with the Risen One, he had to enter into communion with the Church, he himself had to be baptised, he had to live in harmony with the other Apostles. Only in such communion with everyone could he have been a true apostle, as he wrote explicitly in the First Letter to the Corinthians: “Whether then it was I or they, so we preach and so you believed” (15:11). There is only one proclamation of the Risen One, because Christ is only one.

As can be seen, in all these passages Paul never once interprets this moment as an event of conversion. Why? There are many hypotheses, but for me the reason is very clear. This turning point
in his life, this transformation of his whole being was not the fruit of a psychological process, of a maturation or intellectual and moral development. Rather it came from the outside: it was not the fruit of his thought but of his encounter with Jesus Christ. In this sense it was not simply a conversion, a development of his “ego”, but rather a death and a resurrection for Paul himself. One existence died and another, new one was born with the Risen Christ. There is no other way in which to explain this renewal of Paul. None of the psychological analyses can clarify or solve the problem. This event alone, this powerful encounter with Christ, is the key to understanding what had happened: death and resurrection, renewal on the part of the One who had shown himself and had spoken to him. In this deeper sense we can and we must speak of conversion. This encounter is a real renewal that changed all his parameters. Now he could say that what had been essential and fundamental for him earlier had become “refuse” for him; it was no longer “gain” but loss, because henceforth the only thing that counted for him was life in Christ.

Nevertheless we must not think that Paul was thus closed in a blind event. The contrary is true because the Risen Christ is the light of truth, the light of God himself. This expanded his heart and made it open to all. At this moment he did not lose all that was good and true in his life, in his heritage, but he understood wisdom, truth, the depth of the law and of the prophets in a new way and in a new way made them his own. At the same time, his reasoning was open to pagan wisdom. Being open to Christ with all his heart, he had become capable of an ample dialogue with everyone, he had become capable of making himself everything to everyone. Thus he could truly be the Apostle to the Gentiles.

Turning now to ourselves, let us ask what this means for us. It means that for us too Christianity is not a new philosophy or a new morality. We are only Christians if we encounter Christ. Of course, he does not show himself to us in this overwhelming, luminous way, as he did to Paul to make him the Apostle to all peoples, but we too can encounter Christ in reading Sacred Scripture, in
prayer, in the liturgical life of the Church. We can touch Christ’s Heart and feel him touching ours. Only in this personal relationship with Christ, only in this encounter with the Risen One do we truly become Christians. And in this way our reason opens, all Christ’s wisdom opens as do all the riches of truth. Therefore let us pray the Lord to illumine us, to grant us an encounter with his presence in our world, and thus to grant us a lively faith, an open heart and great love for all, which is capable of renewing the world.