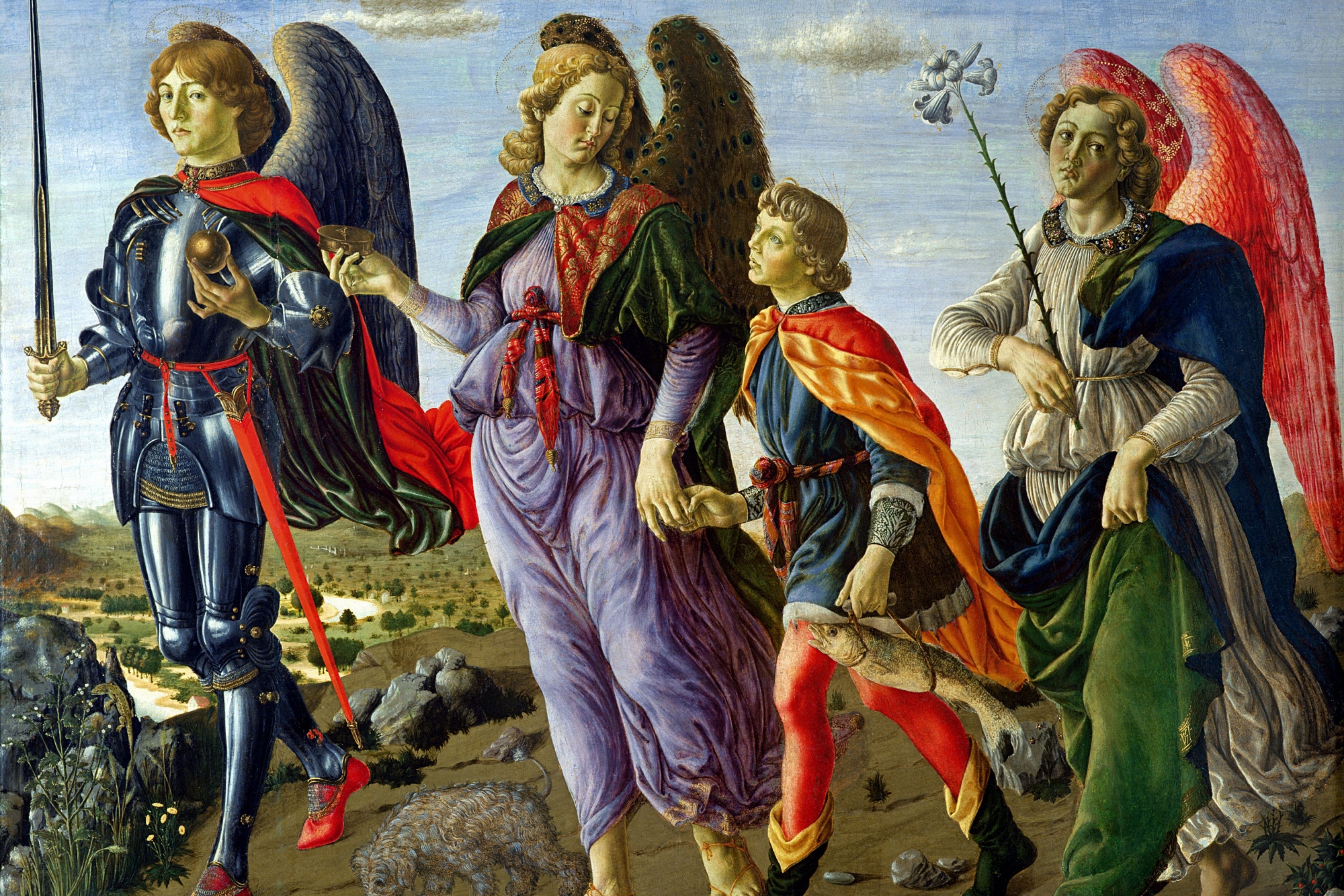 “The powers of hell will assail the dying Christian; but his angel guardian will come to console him. His patrons, and St. Michael, who has been appointed by God to defend his faithful servants in their last combat with the devils, will come to his aid.”

The Feast celebrates the three archangels named in Sacred Scripture, reminding us of the angelic world and of their constant ministrations to the world.

St Michael (meaning ‘Who is like God’) is venerated as captain of the heavenly army, victor over Satan, protector of the Church and helper of the sick and dying. Today’s feast originated as that of the dedication of a Roman basilica in his honour.

St Gabriel (meaning ‘Strength of God’) announced both the birth of St John the Baptist (to Zechariah) and of Jesus Christ (to the Blessed Virgin Mary). His greeting at the Annunciation, ‘Hail, full of grace,’ has become one of the most familiar prayers.

St Raphael (meaning ‘God heals’) took care of Tobias on his journey, as described in the book of Tobit, and is often associated with the angel of the sheep pool (Jn 5:1-4). He is a patron of the blind, travellers and physicians and nurses.

O God, who dispose in marvellous order
ministries both angelic and human,
graciously grant
that our life on earth may be defended
by those who watch over us
as they minister perpetually to you in heaven.
Through our Lord Jesus Christ, your Son,
who lives and reigns with you in the unity of the Holy Spirit,
one God, for ever and ever.

Who are the archangels?

Written by J. B. Midgley in Companion to the Angels.

Michael (‘Who is like unto God?’) makes an early appearance in the Old Testament when he comes to the assistance of the prophet Daniel in a time of conflict. He is the leading prince of God’s army and the protector of Israel. (Dn 10:13). Reference has already been made to the Book of Revelation (12:7-12) which vividly describes how he, and the angels faithful to God, defeated Satan and his followers in a mighty battle and drove them out of heaven. The Christian church has always shown great devotion to St Michael. As the Kingdom of Heaven on earth it is appropriate that she acknowledge the part he played in foiling Satan’s attempt to overthrow God’s rule. After Mary, the Blessed Mother of God, he has place of honour in the Litany of the Saints, the ‘Confiteor’ and the Baptismal Liturgy.

History of the Devotion

The Emperor Constantine was so grateful for military victories he attributed to Michael’s intervention that he built the Michaelion Basilica near Constantinople in his honour. This quickly became a place of pilgrimage for the Eastern Church and renowned for cures of the sick. It was soon joined by fifteen other churches which bore his name. There was such confidence in his intercession for the sick that, in Greece and Asia, even early health spas
were called after him.

In the West, the Saint appeared in the fifth century to the Bishop of Siponto at monte Gargano in the Kingdom of Naples. The Church of St Michael, built on the site of the apparition became a centre of devout and efficacious
pilgrimage and, until 1969, the event was celebrated by the whole Church with its own Feast on May 8th. Afterwards, churches consecrated to him multiplied, particularly in Rome. The most famous shrine in the West is Mont-St-Michel in Normandy, where a Benedictine monastery was founded in the tenth century to honour another apparition, celebrated locally on October 16th. After Germany’s conversion, veneration replaced that previously accorded to the god Woden and numerous St Michael chapels became features of the mountain and forest districts.

Gabriel (‘Strength of God’) stands in God’s presence and is His ambassador of revelation and intercession. He visited Daniel to teach him understanding and inform him that he was to rebuild Jerusalem in preparation for the coming of the Anointed Prince who would establish a New Covenant with man. (Dn 9:20-27). He is the herald of salvation who announces the birth of John the Baptist, the last and greatest of the prophets who stands astride the two covenants. To him, God entrusts the announcement of the Incarnation to Mary, in whose motherhood God the Son becomes man, divine and human natures are united and the work of Redemption begun. (Lk 1:11-20;26-32).

Gabriel and the life of Christ

When Joseph learned of Mary’s pregnancy and decided to end their betrothal with delicacy, Gabriel is thought to have been that “angel of the Lord” who tells him, in a dream, not to be afraid to take her home as his wife because she had conceived by the power of the Holy Spirit. (cf Mt 1:20). He gives the shepherds the news of the Saviour’s birth and selects them as the first visitors to the Divine Child. They will confirm his earlier annunciation so that Mary will treasure in her heart the knowledge that her Son is the world’s Redeemer. There is a similarly pious but logical assumption that Gabriel would have led the angelic choir in their acclamation, “Glory to God in the highest heaven and peace to men of good will.” (cf Lk 2:1-20). When the wise men from the East have adored the new-born King and offered their presents, we recognise Gabriel’s solicitous co-ordination in his advice to avoid Herod on their homeward journey. St Joseph’s sleep is not to be left undisturbed. Gabriel urges him to get up and protect his family from Herod’s murderous intentions by escaping to Egypt. When Herod is dead the angel, in another nocturnal visit, tells him to return with them to Israel but, even as he travels, he has a similar warning to go to Nazareth of Galilee rather than Bethlehem of Judea. Antipas was ruler in Galilee but Archelaus in Judea was even more of a threat. In choosing the less dangerous, the angel and Joseph enabled the fulfilment of the prophecy that Jesus Christ would be called a Nazarene. (cf. Mt 2).

The Fathers of the Church believed it was Gabriel, the angel of the annunciation, who comforted Christ in His Agony in the Garden. It is touchingly appropriate that the same Archangel should watch over both the beginning
and the end of His Lord’s life on earth.

When we recite the first Joyful mystery of the Rosary and the Angelus, there is opportunity to revere the Blessed Virgin and her messenger and offer them a renewal of their joy at the moment of the Incarnation.

Raphael (‘God heals’) introduces himself in the Book of Tobit as one of the seven angels always ready to stand in the glory of the Lord’s presence. Tobit, suffering from blindness, was unable to help his son, Tobias, finds someone to show him the way to Medina. Raphael, in human appearance, arrives and offers to be companion and guide on the journey. Tobias had been hoping to marry Sarah, the daughter of Raguel but the poor girl had
been betrothed on seven previous occasions and each time, Asmodeus, “the worst of demons”, had killed the intended but unfortunate bridegroom. When the young couple prayed to God for help, He sent Raphael who cured Tobit’s blindness who, with God’s light restored was able to bless the union of his son and Sarah and so rid her of Asmodeus’ influence.

Raphael and the will of God

This Archangel offers further insight on the position of the angels in God’s plan and their consequent relationship with us. He explains to Tobit and Tobias that, as the messenger of God, he hears the prayers of people on earth
and presents them to Him. He is present, not by his own decision but because so wishes and it is he who must be praised and thanked through all ages. (cf Tb 3: 7-17; 12:12-21). The early Christians believed Raphael tended
the wounds suffered by the martyrs and consoled them in their sufferings. He is invoked as a comforter of the sick to whom he may bring renewed health if that is what God wishes. The Fathers were of the opinion that it was of
Raphael whom St John had in mind when he described the sheep-pool in Jerusalem and the Bethzatha building’s five porches where the afflicted waited for the pool’s water to move. “At intervals, the angel of the Lord came down and the water was disturbed and the first person to enter the water after this disturbance was cured.” (Jn 5:1-4). In 1921, Pope Benedict XV declared St Raphael the Patron of post-office, telephone and telegraph workers.

Do We Become Angels When We Die?

Companion to the Angels (ebook)