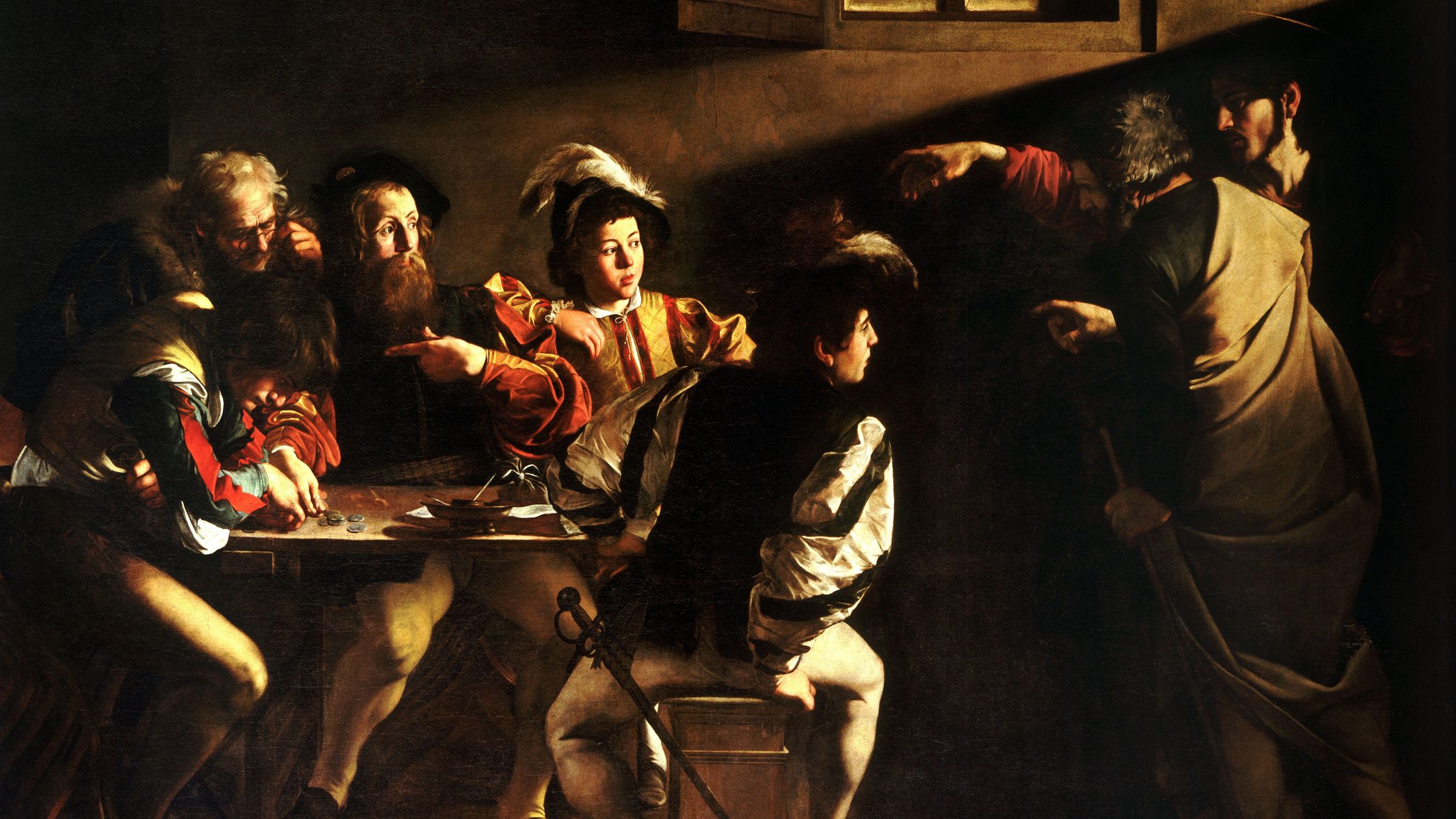 As Jesus was walking on from there he saw a man named Matthew sitting by the customs house, and he said to him, ‘Follow me’. And he got up and followed him.

Today’s saint is written by Julien Chilcott-Monk in Saints of the Roman Canon.

Levi seems to have been renamed Matthew – a gift of The Lord – by Jesus himself, perhaps so that he might dissociate himself from his former life. According to Mark 2:14, Levi was the son of Alphaeus and thus, quite possibly, the brother of James.

Matthew was a tax-gatherer for the Roman authorities, and would therefore have been considered a sinner by the scribes and Pharisees and, indeed, generally reviled by Jews and non-Roman Gentiles alike.

In both the gospels of Mark and Luke, Matthew is referred to as Levi, but in the gospel of Matthew, he is named Matthew from the moment he appears.

Jesus crosses the water in a boat and alights at Capernaum, his own town, where he heals a paralytic. He declares the man’s sins forgiven, and then instructs him to “Get up, and pick up your bed and go off home” after some of the people question his power or authority to forgive sin. Afterwards, he sees Matthew (or Levi) in the custom-house and says “Follow me”. Matthew responds immediately. He too has sins to be forgiven and he has, we can surmise, sat at his post mulling this over maybe for years. Was he awaiting the divine nudge? Later, perhaps the same day, a number of tax-gatherers join Jesus, and, presumably, Matthew, at dinner. Was Matthew’s sudden conversion such an attractive idea to them that they simply had to discover more? How many of them joined the outer ranks of Jesus’s disciples (Mt 9:1-13)?

From the earliest times, Matthew has been associated with the gospel that carries his name. Of course, there is no firm evidence for this attribution, though longheld tradition is persuasive. It is likely, in any event, that between the time of the Fall of Jerusalem in AD 70 and the year 80, this gospel achieved its present form. Its ingredients are drawn from a source known to Luke and,
it is probable, from Mark’s gospel. However, its starting point could have been a collection of reminiscences by the hand of Matthew himself, maybe in Hebrew or Aramaic, aimed at the Jewish reader.

Many traditions claim Matthew as a visiting missionary in this place or that. His most likely area of interest, after Pentecost, was Judaea itself, and then, perhaps further east. The manner of his death is not known.

Matthew shows us how we ought to react to divine promptings.

O Saviour Jesu, not alone
We plead for help before thy throne;
Thy Mother’s love shall aid our prayer
To win for us that healing care.
Let all who served thy Church below,
And now thy heavenly freedom know,
Give heed to help our lingering strife
And claim for us the crown of life.

Pray for all writers of religious work, for study and devotion.St Matthew, pray for us.

O God, who with untold mercy
were pleased to choose as an Apostle
Saint Matthew, the tax collector,
grant that, sustained by his example and intercession,
we may merit to hold firm in following you.
Through our Lord Jesus Christ, your Son,
who lives and reigns with you in the unity of the Holy Spirit,
one God, for ever and ever.

Augustine of Hippo seems to have been responsible for putting the gospel of Matthew first in the order of the four gospels, and it is always printed at the head of the gospels. In the early Church it seems to have been the most popular and widespread of the gospels, and until the recent reforms of the Lectionary it was the gospel read most frequently in the liturgy. However, it was almost certainly the second gospel to be written, for it uses and expands on Mark, expressing Matthew’s own particular angle on the Good News of Jesus. It contains far more of the teaching of Jesus than does Mark. Most scholars think that Matthew and Luke both drew this teaching from a collection of ‘Sayings of the Lord’ which has since disappeared, though some attribute the elaboration to Matthew’s own work.

Matthew is the most Jewish of the gospels, insisting on every page that Jesus fulfils the promises of the Old Law. Jesus is a second David, adopted by Joseph into the House of David (1:20-25), addressed frequently as ‘son of David’ (1:1; 9:27; 15:22), and hailed as the messianic king of David’s line (21:9). Matthew also depicts him as a second Moses (2:20, compare Exodus 3:19), who forms a new People of God, just as Moses formed the People of God in the Old Testament (16:18). In Mark Jesus re-interpreted the Law; in Matthew Jesus gives a whole new Law, in the Sermon on the Mount, which perfects the old (5:17-20), bringing it to completion by interpreting it in accordance with the scriptural principle, ‘What I want is love not sacrifice’ (Ho 6:6; Mt 9:13; 12:7; 23:23). So it is the old Law read in a new way. Nevertheless, Matthew is deeply Jewish in his thinking. He is much less absolute than Mark on the abolition of such Jewish practices as the Sabbath and the prohibitions of eating certain foods (compare Mk 7:20 with Mt 15:17). He shows Jesus acting always carefully in accordance with scriptural precedent (12:5, 11). With very rare exceptions, with habitual Jewish reverence he avoids using the name ‘God’, speaking of ‘the Kingdom of Heaven’ rather than ‘the Kingdom of God’.

Yet at the same time there is stern criticism of current Judaism, Judaism as it was lived in Matthew’s own day. The Jewish leaders, the scribes and Pharisees are heavily criticised for their concept of righteousness (5:20), for their hypocrisy (23:1-36), for their performance in public of the three classic good works of Judaism, fasting, prayer and almsgiving (6:1-18). Right at the beginning the Jewish King Herod is sharply contrasted with the gentile Magi, when he attempts to kill Jesus and they bring their gifts to the newborn child (2:1-16). Of the centurion of Capernaum Jesus says, ‘nowhere in Israel have I found faith like this’ (8:10). In his parables Matthew’s gospel underlines that the

Jews are no longer the custodians of the Vineyard of Israel (21:43), and that their city is doomed to be destroyed (22:7). A hint of why this may be is occasionally given: ‘they will flog you in their synagogues’ (10:17) suggests a background of persecution of Christians by Jews – or rather, in Matthew’s situation, of Christian Jews by Jews who did not accept Jesus as the Christ (11:21-24). They had failed to accept that something greater than Solomon (12:42), something greater than the Temple was present (12:6). Such a background of persecution and mutual hostility goes far to account for the terrible saying which has been at the root of so much Christian anti-Semitism, ‘his blood be upon us and upon our children’ (27:25).

More clearly than in Mark, Jesus is an exalted figure, somehow as though he were already the Risen Christ. In some of the miracle-stories the crowd-scenes have melted away to leave a solemn and solitary confrontation between Jesus and the sufferer (compare Mk 1:29-31 with Mt 8:14- 15, Mk 5:27 with Mt 9:20). His exalted status cannot remain hidden. At the final judgement it will be Jesus enthroned with his holy angels who exercises the divine prerogative of judgement (25:31). Far sooner than in Mark, human beings recognise Jesus as ‘son of God’, Peter confessing him as such when in Mark the disciples are still utterly puzzled (16:16; 14:33, compare Mk 6:51-52). As Mark is the story of the gradual understanding of the meaning of Jesus as ‘son of God’, so Matthew goes one step further and is the revelation of what it means that through Jesus, God is with us. At the outset the child is to be named ‘Emmanuel’, which means ‘God-with-us’ (1:23), and at the end the Risen Christ promises to be always with his people (28:20, bracketing the gospel at beginning and end). In the great chapter on the community he promises that when two or three are gathered together, there he is in the midst of them (18:19). This promise is the source of their authority, which makes the decisions of the community binding also in heaven. Just as in the Old Testament the People of God is made holy by the presence of God among them, at first in the Tent of Meeting and later in the Temple, so the new People of God is made holy by the presence of Christ.

Matthew on the Community

While in Mark all the emphasis is on the arrival in Jesus of the Sovereignty or Kingdom of God, Matthew makes far more provision for the permanence of this community of the Church. In Mark Jesus makes little or no provision for the future of his community, as though the world might come to an end at any moment. In Matthew the promise of Christ’s divine presence in the Church brings with it provision for a structure of authority, a machinery for achieving reconciliation (18:15-17), an authority for making decisions, conferred both on the community and on Peter himself (16:18; 18:18). Jesus’ chosen Twelve will have a position of judgement, sitting on twelve thrones (19:28), though this does not contradict that all are still brothers in the Church (23:8-12). This may be the reason why Matthew quietly omits much of the criticism of the Twelve which occurs in Mark. There is a whole chapter on how missioners should behave and how they should be received (10:1-33). The need for continuing good works is emphasised: good works are like a wedding garment (22:11), like oil prepared for long-burning lamps (24:7), and will finally be the criterion on which all people will be judged (25:45).

Much of Matthew’s power comes from what can only be described as his poetry. The rhythm of the sayings is beautifully balanced, often with a neat double opposition (‘grapes from thorns or figs from thistles’, 7:16; ‘the harvest is rich but the labourers are few’, 9:37). The same balance is seen in the parables. While Mark’s parables are all about nature (seed, growth, harvest), all the long parables in Matthew are about people, contrasting good and bad in a black-and-white opposition: building a house on rock or sand (7:24-27), the ten wedding attendants (25:1-13), the sheep and the goats 25:31-46).

Matthew is a skilled teacher. He likes to use memorable and repeated formulas, ‘You have learnt how it was said…, but I say to you…’ (5:21-48), or the formula ‘this was to fulfil the prophecy’(8:17) with which he 14 times introduces an Old Testament quotation. The teaching of Jesus is easier to assimilate because it is gathered together into five great discourses arranged symmetrically: entry into the Kingdom (chapters 5-7, the Sermon on the Mount), external relations (10, the Mission Discourse), parables of the Kingdom (13), internal relations (18), final judgement in the Kingdom (24-25). His imagery helps to make the sayings memorable, for example the use of animals as symbols of qualities (cunning as serpents, harmless as doves, 10:16), and he delights in pairs of images, often contrasting (broad road and narrow gate, 7:13-14, bird’s nest and foxhole, 8:20).

In reading Matthew it might be useful to be alert especially to the way Matthew, though describing Jesus’ life on earth, is clearly aware that he is now the Risen Lord. Matthew is strongly conscious that Christ is present in his community – without his presence the ship of the Church is lost – and of Christ’s work carried out by the members of the community.

Gospel According to Matthew