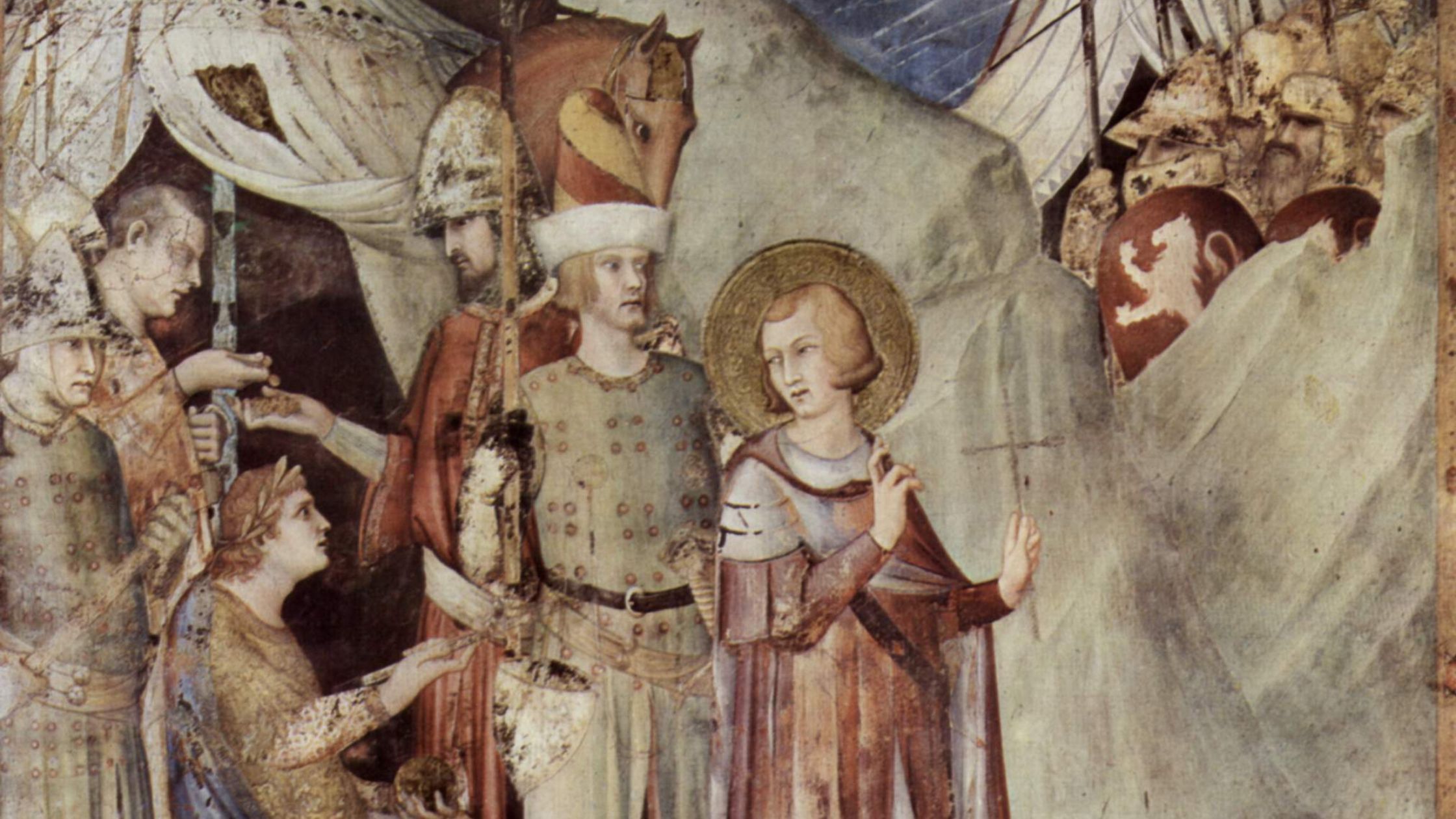 Lord, if your people need me, I will not refuse the work. Your will be done.

St Martin (316-397) was born to pagan parents at Szombathely (now Hungary, but then in the Roman province of Pannonia) and served as a soldier. At the age of eighteen he was baptised and, around this time, met a naked beggar to whom he gave half his cloak. That night he had a dream in which the Lord Himself was wearing his cloak. St Martin founded a monastery and became Bishop of Tours (France). He was one of the first saints to be popularly venerated despite not being a martyr.

Collect for St Martin of Tours

O God, who are glorified in the Bishop Saint Martin both by his life and death, make new, we pray, the wonders of your grace in our hearts, that neither death nor life may separate us from your love. Through our Lord Jesus Christ, your Son, who lives and reigns with you in the unity of the Holy Spirit, one God, for ever and ever.

How to love your neighbour

You can have lots of theories about love, but what does it actually mean in practice? St Martin of Tours was a young soldier in the fourth century. He was riding his horse in the coldest part of the winter when he met a beggar sitting at the side of the road by the city gate. He had nothing to give him, but in a moment of inspiration he drew his sword, cut his cloak in half, and gave one half to the beggar.

That night, St Martin had a dream. In the dream, Jesus was wearing the half of the cloak that Martin had given away. Jesus said to the angels, “See how Martin has clothed me with his robe.” It’s a true story, and a beautiful symbol of the love of neighbour that all Christians are called to.

It’s a radical call to love without conditions, without calculation, without expecting any reward. It’s tough! And let’s admit that sometimes we do not like this teaching. We are called to a sacrificial love that seems to go beyond the normal call of duty and even beyond what seems reasonable.

Mother Teresa was a nun in India, teaching in a girls’ school, doing good work. But one day she felt an inner calling, to leave the monastery and the school, to go out into the slums of Calcutta, and to serve the poorest of the poor. She wanted to go to those who had nothing, to share their life, and to bring the light of Christ into the darkness of the slums.

She brought the sick and dying into her homes; she educated the abandoned children she met and gave them food and hope; she gathered nuns around her who would do this work in some of the poorest places in the world.

Mother Teresa went beyond the walls of her settled life to seek out her neighbour in the poorest of the poor. She is such a powerful symbol of Christian joy and selfless love. We may not choose the same path as her, but we can have the same desire to love others, in the ordinary circumstances of our own lives.

She was simply following the example of Jesus. At the Last Supper, Jesus took off his outer garments and bent down to wash the feet of his disciples. It’s a symbol of humble service, as the Son of God goes on his knees before us. But it’s also a symbol of great tenderness and compassion, the selfless love of a friend for his friends, of a brother for his brothers.

The story of the Good Samaritan is probably the greatest illustration of what it means to love one’s neighbour. A man has been stripped and beaten and abandoned by robbers. A Samaritan traveller is the only one who is willing to cross the road and help him. He is moved with compassion; binds up his wounds; and cares for him at the nearest place of lodging.

The Good Samaritan goes the extra mile. His love is kind, compassionate, generous, practical, selfless. It’s a sacrificial love, but it is filled with tenderness and affection.

This is the kind of love we are called to have for others. For those we are close to, who are sometimes the hardest to love: family, neighbours, colleagues at work. For those we see each day but never acknowledge. For the unexpected visitor, the stranger, the foreigner. And especially for the poor, the sick, the vulnerable, the lonely, the elderly, the dying.