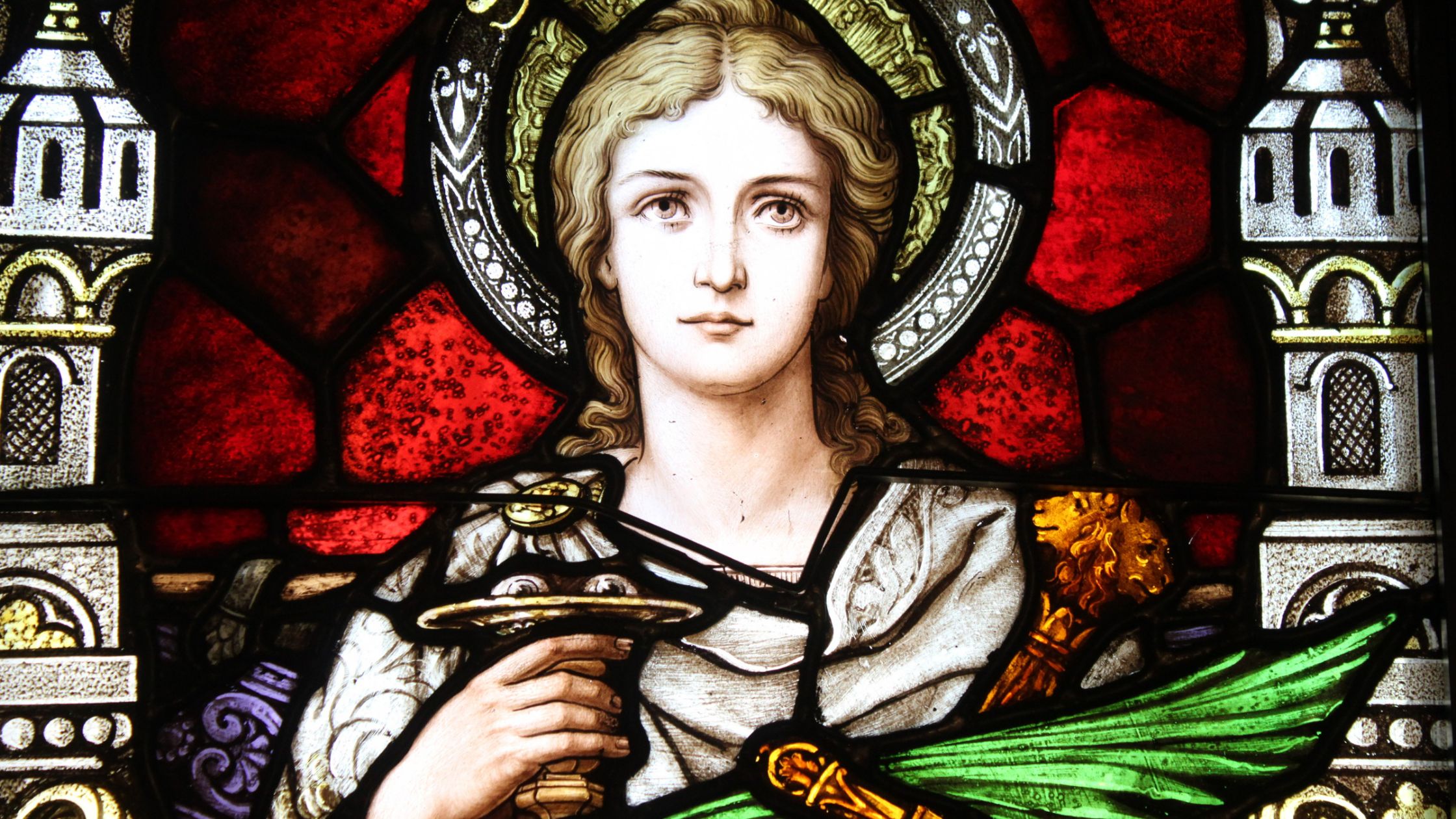 Those whose hearts are pure are temples of the Holy Spirit.

Who was St Lucy?

St Lucy (+ c.304) was probably born in Syracuse (Sicily) and martyred during the persecution of Diocletian. Legend makes her the daughter of a wealthy family who was brought up as a Christian, and, having resisted the advances of a pagan suitor, was arrested, tortured and killed. Her name is mentioned in the Roman Canon and her feast, situated near the shortest day of the year, is celebrated in Sweden and elsewhere as a festival of light.

May the glorious intercession of the Virgin and Martyr Saint Lucy give us new heart, we pray, O Lord, so that we may celebrate her heavenly birthday in this present age and so behold things eternal. Through our Lord Jesus Christ, your Son, who lives and reigns with you in the unity of the Holy Spirit, one God, for ever and ever.

How to Celebrate St Lucy’s Day

St Lucy’s Day is on December 13th. Her name means “light” and she is associated with the idea of brightness in this darkest time of the year. She was a young Roman martyr, and we commemorate her in the Canon of the Mass (“Agnes, Cecilia, Agatha, Lucy…”)

She became particularly popular in Scandinavia – where the darkness at this time of the year is particularly prolonged – and her feast-day is still celebrated there. A young girl is dressed up as a “Sancta Lucia” figure, a sort of Christmas angel, with a long white gown, a red sash (symbolising St Lucy’s martyrdom) and, most importantly, an evergreen crown with candles. This last is not easy to make! In Scandinavian countries, you can buy electrically-operated ones! But you can make artificial candles using cardboard tubes and some flame-coloured tissue paper, and an evergreen crown can be achieved with some bendy wire and bits of greenery. “St Lucy” also serves everyone with tempting coffee and cake – traditional Danish pastries.

It is not quite clear how St Lucy, who was a Roman martyr of the early church and did not live in Scandinavia, came to be so popular in the Nordic countries. One school of thought suggests that Viking raiders or traders picked up her story on a foray to the Meditteranean and brought it back with them.

What is certain is that at one point her story got mixed up with that of a famine which occurred in Denmark , when large numbers of people were starving because of a bad harvest. When ships bringing grain were first sighted, a young girl rode at speed from village to village and farm to farm spreading the word in the early morning, and people came to help unload the food and distribute it. Thus the legend of St Lucy is associated with early mornings – traditionally St Lucy rises early, while it is still dark, and makes coffee and saffron buns for everyone in the family! Serving breakfast in bed to parents is another aspect to this tradition. And there are St Lucy figures who visit hospitals and hospices and serve coffee and breakfast pastries on this day.

Under the old Julian calendar, December 13th was the winter solstice. This had occurred because, over a period of many centuries, the calendar had slipped to be out of alignment with the lunar calendar and needed to be corrected. In 1582 a Papal Bull by Pope Gregory established a new calendar which gave us, among other things, our system of leap years. But this new calendar was not accepted for many years by Protestant countries (including Scandinavia and Britain) or by Orthodox ones (including Russia). They used the old Julian calendar – and in the case of Russia went on doing so until 1917.

St Lucy as a figure of light is an attractive and useful image for young girls, and a celebration of St Lucy’s Day can involve some enjoyable if messy practical things including baking pastries as well as creating Lucy crowns and gowns. Websites for all the Scandinavian countries (Sweden, Norway, Denmark) offer recipes for saffron buns and other pastries, and also ideas for making St Lucy costumes. A visit to a local library will furnish information too.

The idea of light – the name Lucy gives us words such as “lucid” meaning clear, and “translucent” meaning that light can shine through it – fits in very well with Advent and the candles on the Advent wreath. St Lucy’s Day also has the advantage that it is a delightful celebration but doesn’t involve expensive gifts – it’s all about coffee and pastries, light, generosity, and service – and little girls dressing up in white with candle-crowns and red sashes.