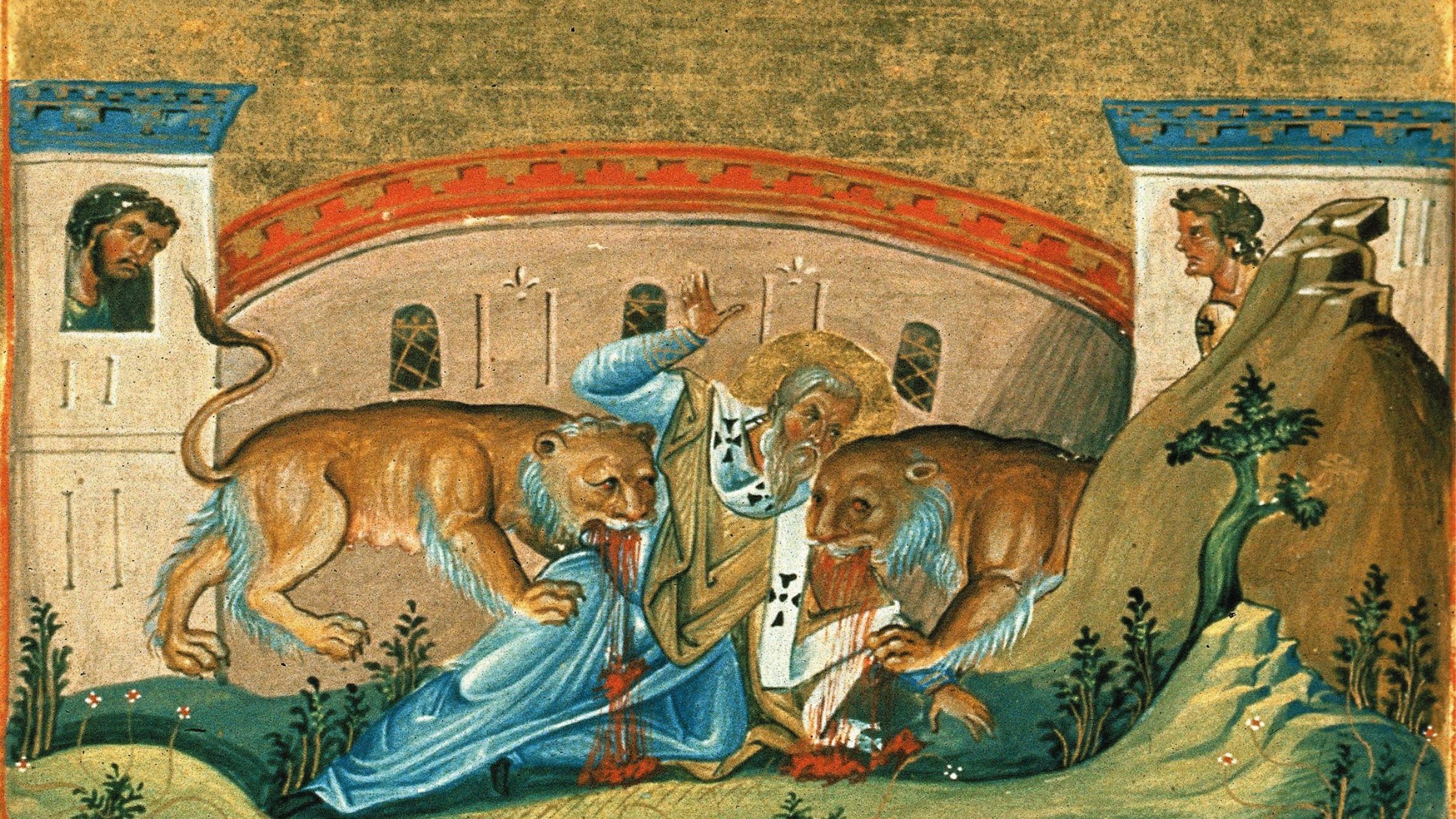 No earthly pleasures, no kingdoms of this world can benefit me in any way. I prefer death in Christ Jesus to power over the farthest limits of the earth. He who died in place of us is the one object of my quest. He who rose for our sakes is my one desire.

St Ignatius (+ c.107) followed St Peter as bishop of Antioch and was thrown to wild beasts in Rome (possibly at the Colosseum) during the persecution of Trajan. On his way to Rome he wrote seven epistles, which give a clear picture of Christian belief and practice a century or so after Christ’s birth. His name is mentioned in the Roman Canon

Almighty ever-living God, who adorn the sacred body of your Church with the confession of holy Martyrs, grant, we pray, that, just as the glorious passion of Saint Ignatius of Antioch which we celebrate today, brought him eternal splendour, so it may be for us unending protection. Through our Lord Jesus Christ, your Son, who lives and reigns with you in the unity of the Holy Spirit, one God, for ever and ever.

Who Was St Ignatius of Antioch?

Written by Julien Chilcott-Monk in our ebook Saints of the Roman Canon.

Ignatius of Antioch in Syria was martyred in Rome in or about the year 110 in a period of renewed persecution, during the reign of the emperor Trajan (98-117). Little is known save that he was Bishop of Antioch in Syria in 70. He is believed to have been a disciple – along with Polycarp – of the apostle John. Ignatius referred to himself as the God-carrier and exhorted his flock to understand that it was the vocation of a follower of Christ to bear God with him and thus reveal him to others.

Ignatius was condemned in Antioch and taken in chains on the long and arduous journey to Rome. Most of what is known about Ignatius is revealed in the seven letters he wrote or dictated and had delivered in the course of his journey.

The first four of his letters – those addressed to the Ephesians, Magnesians, Trallians and the Romans – were composed during a break in the journey at Smyrna. St Ignatius was apparently permitted visitors and many came to offer their support and prayers. And his letters to the Churches in Ephesus, Magnesia and Tralles were mostly letters of thanks and encouragement to keep faith in Christ. He was keen to hail the Ephesians as God-carriers, Christ-carriers, who carry holiness with them throughout their daily lives. He reminds the Magnesians that to be called a Christian means being a Christian. And he gives a gentle warning to the Trallians about the need to avoid heresy. He assures his friends and acquaintances in Rome that he has accepted his sentence and looks forward to his death as the door to life. He sees that death through suffering is a privilege. He is aware that he will become the food of ferocious beasts and that they will devour every scrap of him.

At the next station – at Troas – Ignatius writes to the Church in Philadelphia and Smyrna, and to the Bishop of Smyrna, Polycarp. He encourages them in their faith and greets them warmly and effusively. After this he travels further by sea and by land until he finally reaches Rome.

It was not long before he was flung to his death in the Flavian Amphitheatre in Rome, known to us as the Colosseum. There an assortment of hungry wild beasts consumed him for the entertainment of enthusiastic crowds.

“Allow me to be the food for wild beasts of prey, which is the manner in which I shall make my way to God. God’s wheat flour I am, and by the teeth of the beasts of prey I shall be ground that I may prove to be Christ’s pure bread. Better still, encourage these beasts of prey to become my sarcophagus and to leave no part of my body behind: once I am at sleep, I have no wish to be a burden to anyone. Only at that time shall I be called a true disciple of Christ Jesus when the world can see nothing of me – not a scrap of my body.” (Letter to the Romans)

May we, with Ignatian equanimity, face our wild beasts of prey.

Worthy deeds they wrought and wonders,
Worthy of the name they bore;
We with meetest praise and sweetest
Honour them for evermore.

(Twelfth century hymn, translated in the 1861 Hymns Ancient and Modern)

Pray for all those who communicate the Faith in writing and face opposition with a smile and confidence in Christ.

St Ignatius, pray for us.