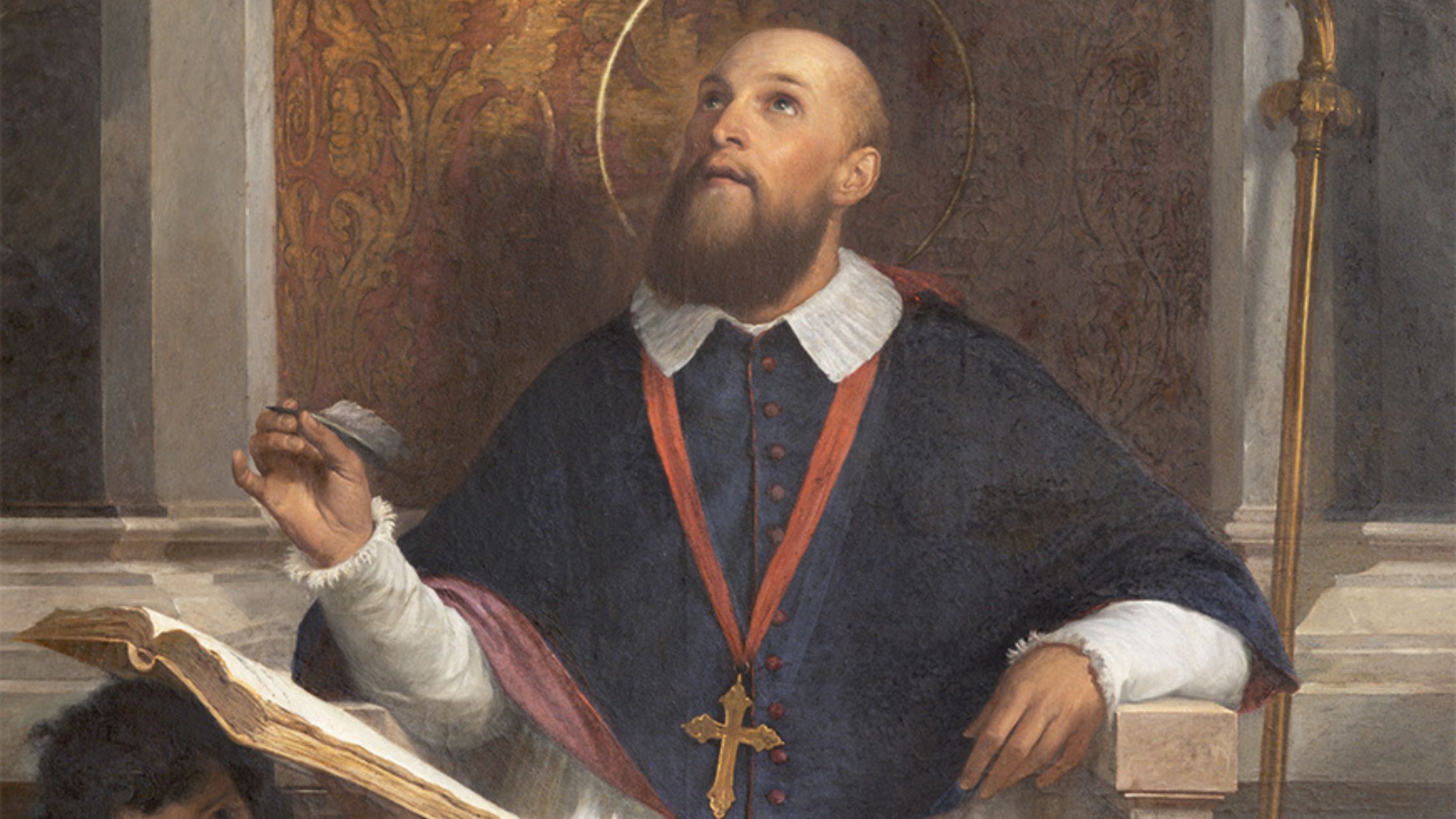 “Have patience with all things, but chiefly have patience with yourself. Do not lose courage in considering your imperfections but instantly set about remedying them – every day begin the task anew.”

Who was St Francis de Sales?

St Francis de Sales (1567-1622) was born in Thorens, Savoy (France) and trained as a lawyer before being ordained. He became Bishop of Geneva in 1602 and did much to combat Calvinism. He also founded the Order of the Visitation, with St Jane Frances de Chantal, and produced popular spiritual works such as Introduction to the Devout Life. His flock called him ‘the Gentle Christ of Geneva’. Pius XI declared St Francis patron of journalists and writers in 1923.

O God, who for the salvation of souls willed that the Bishop Saint Francis de Sales become all things to all, graciously grant that, following his example, we may always display the gentleness of your charity in the service of our neighbour. Through our Lord Jesus Christ, your Son, who lives and reigns with you in the unity of the Holy Spirit, one God, for ever and ever

Pope Francis on the Legacy of St Francis de Sales

As found in our book Totum Amoris Est by Pope Francis.

On this anniversary of the fourth centenary of his death, I have given much thought to the legacy of Saint Francis de Sales for our time. I find that his flexibility and his far-sighted vision have much to say to us. Partly by God’s gift and partly thanks to his own character, but also by his steady cultivation of lived experience, Francis perceived clearly that the times were changing. On his own, he might never have imagined that those changes represented so great an opportunity for the preaching of the Gospel. The word of God that he had loved from his youth now opened up before him new and unexpected horizons in a rapidly changing world.

That same task awaits us in this, our own age of epochal change. We are challenged to be a Church that is outward-looking and free of all worldliness, even as we live in this world, share people’s lives and journey with them in attentive listening and acceptance. That is what Francis de Sales did when he discerned the events of his times with the help of God’s grace. Today he bids us set aside undue concern for ourselves, for our structures and for what society thinks about us, and consider instead the real spiritual needs and expectations of our people. In our own time too, it is helpful to revisit some of the crucial decisions he made, so that we for our part can respond to today’s changes with the wisdom born of the Gospel.

The first of those decisions was to reinterpret and propose anew to each man and woman, in his or her specific condition, the beauty of our relationship with God. The ultimate reason and practical purpose of his Treatise was to illustrate to his contemporaries the attractiveness of the love of God. “What”, he asks, “are the ‘cords’ that God’s providence uses to draw our hearts to his love?” Echoing the words of the prophet Hosea (11:4), he defines those ordinary means as “cords of humanity, charity and friendship”. “Clearly”, he writes, “we are not drawn to God by chains of iron, like bulls or oxen, but by invitations, enticements and holy inspirations; these are the cords of Adam and of human kindness, rightly befitting the human heart, which is naturally free”. By those same cords, God brought his people forth from slavery, taught them to walk and held them by the hand, like fathers and mothers with their children. His was not the way of external imposition, despotic and arbitrary power, or violence, but that of a persuasiveness that respects our human freedom. “The power of grace” – Francis continues, surely thinking of the many life stories he had encountered – “does not constrain the heart, but attracts it. Grace possesses a holy violence, not to violate our liberty but to guide it to love. Grace acts strongly, yet in such a pleasing way that our will is not overwhelmed by so powerful a force; while pressing us, it does not oppress our liberty. Consequently, we are able, before all its might, to consent to or resist its promptings at our pleasure”.

Earlier, Francis had spoken of this relationship using a curious example drawn from ornithology: “There are certain birds, Theotimos, that Aristotle calls ‘apodans’, because they have such short and weak legs as to be of no use to them; it is as if they did not even have them. Should they fall to the ground, they remain there, unable to take flight because, without the use of legs or feet, they cannot rise and take wing. Consequently, they remain on the ground and die there, unless a gust of wind, compensating for their inability, lifts them up, as it often does with other things. If, in that case, they flap their wings in response to the thrust of the wind, the wind itself will continue to help them by thrusting them ever higher, in order to help them to fly higher and higher”. The same holds true for us: we were created by God to fly, to spread our wings in response to the call to love, but once we fall to earth, unless we choose to open those wings to the wind of the Spirit, we risk never again being able to fly.

This, then, is how God’s grace comes to us: by “cords of Adam”, bonds of humanity and love. God’s power can always lift us up to take flight, yet his douceur, his loving kindness, is such that he respects our freedom. It is up to us either to take flight or to remain on the ground. Even as he bestows his grace, God would not have us rise without our consent. Francis can thus conclude: “God’s inspirations, Theotimos, anticipate us and make themselves felt before we are even aware of them, but once we become aware of them, it is up to us either to consent and follow their lead, or to refuse and reject them. They make themselves felt by us without us; yet without us they do not bring about our consent”. In our relationship with God we always experience a gratuitousness that testifies to the depth of the Father’s love for us.

At the same time, this grace never makes us passive. It leads us to realize that God’s love radically precedes us, and that his first gift consists precisely in our acceptance of that love. Each person therefore is responsible for cooperating with his or her own fulfilment, with spreading his or her wings with confident trust before the gust of God’s wind. Here we see an important aspect of our human vocation. “In the Genesis account, God commands Adam and Eve to be fruitful. Humankind has a mandate to change, to build, to master creation in the positive sense of creating from it and with it. So what is to come doesn’t depend on some unseen mechanism, a future in which humanity is a passive spectator. No: we are protagonists, we are – if I can stretch the word – co-creators”. That is what Francis de Sales recognized and sought to pass on through his ministry of spiritual guidance.

Read the rest of Pope Francis’ account of St Francis de Sales and his legacy in Totum Amoris Est.