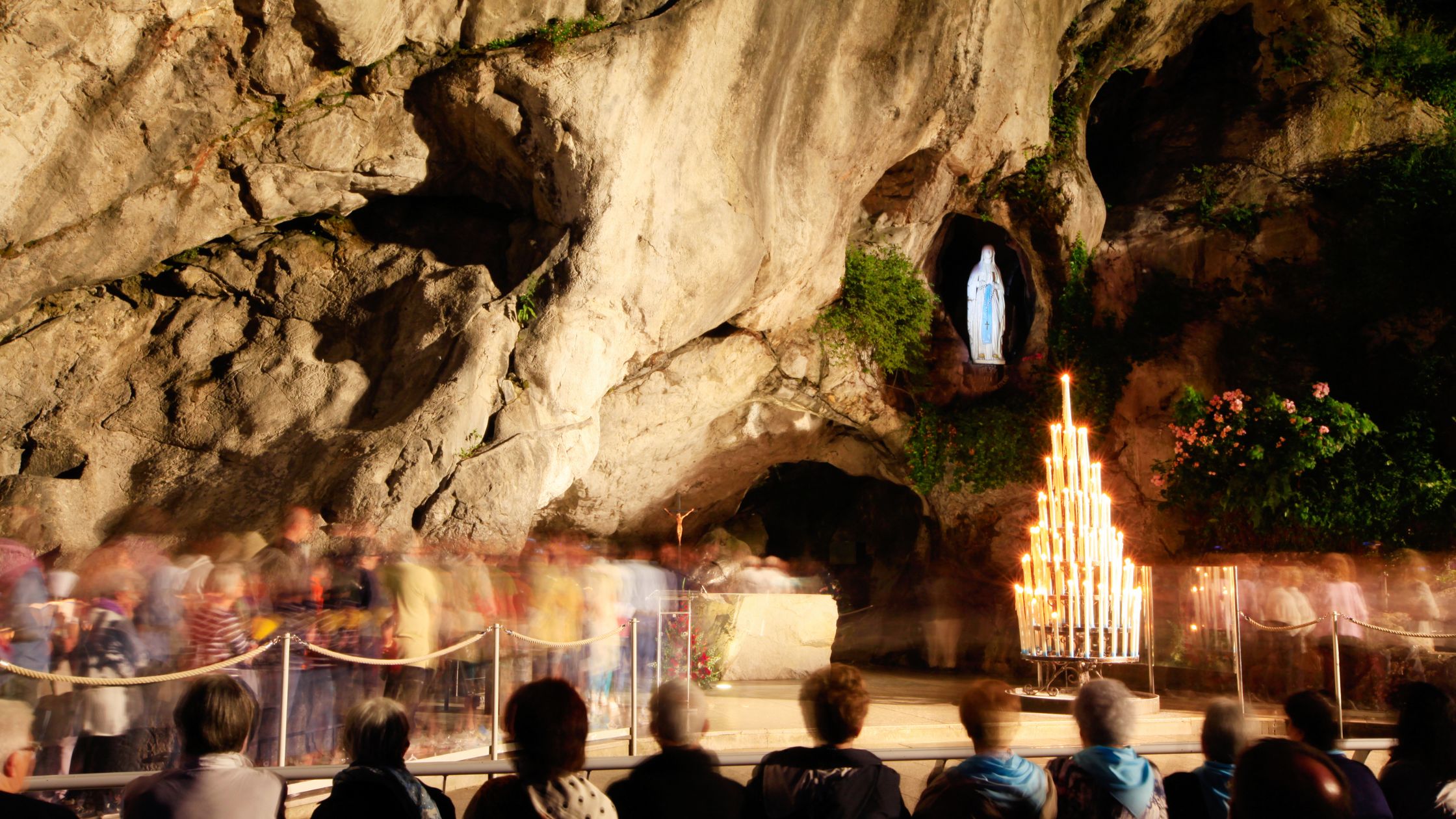 Suffering is something which modern men and women, including many Catholics, find very difficult to endure, or even to understand. “What is the point of it?” they say. “Why would a good God allow us to suffer?” In the past people largely accepted suffering, and even today, in the developing world, suffering is a part of life for many. But the whole trend of modern Western civilisation is to want to do away with pain and suffering, to rebel against them, even though experience should have taught us by now that suffering is inevitable in our world.

The Christian answer to the problem of pain and suffering, however, is that suffering, while not a good thing in itself does have a meaning and a purpose, and that, rightly understood and accepted, it can be a powerful impetus in our journey towards God. This was one of the underlying messages which emerged from the apparitions at Lourdes in 1858, not least through the life of Bernadette Soubirous, the seer of Lourdes, who endured so much suffering in her comparatively short life.

Lourdes, through the spring uncovered by Bernadette, became a great centre for pilgrimages for the sick, and was also the scene of many miraculous cures; but it is also an implicit reminder through the messages of Our Lady, and through Bernadette’s heroic witness, of the fact that the sufferings of Christ during his crucifixion were an essential part of God’s plan for the redemption of mankind. We should also realise too that St Paul had said that he was happy to suffer in his own body to make up for what still had to be undergone by Christ for the sake of his Church (Col 1:24), a statement which indicates that the Mystical Body of Christ, that is all Christians, must also expect to suffer if we are to be truly like Christ.

The vast majority of the sick people who have gone to Lourdes have not been cured, and yet the grace to accept their sufferings and offer them up lovingly to God will have been freely available to them: all that is necessary is to ask for it with faith. Despite the tremendous medical advances which have taken place since the nineteenth century, there are still many diseases which medical science is unable to deal with adequately. And this is to say nothing of the huge growth in emotional problems which affect so many in the West today. Thus we have a situation where many people are still desperately in need of healing, and perhaps in most cases are more in need of emotional than physical healing. And it is undoubtedly the case that we are all in need of spiritual healing to some degree or other. Thus although medical science has found a way to deal with many illnesses, the essential message of Lourdes and St Bernadette, that only by turning to God with a humble and contrite heart can we find true healing and true happiness, is no less timely today than it was one hundred and fifty years ago.

The business of being ill

We can imagine that we have at last arrived as pilgrims at Lourdes. It has been a long and tiring journey, and for some it might have a painful one; but we have been supported by our eagerness to reach the Grotto where Our Blessed Lady appeared to Bernadette. And now we are at the very spot where St Bernadette knelt and talked with Mary, looking up at the very Grotto where Our Lady herself appeared.

This is a good moment to review the story of these apparitions.

Bernadette, a little girl intellectually backward and physically ill, left her home one day in Lourdes, in February 1858, to gather sticks by the side of the River Gave, because they were too poor at home to afford coal for their fire. In reality, her home was little more than a hovel; they lived in an old disused prison. As she and her brother and sister came along the riverbank, they reached a canal. Bernadette, fearing the cold water, was afraid to cross. Her brother and sister laughed at her and left her behind. Bernadette stooped down to remove her stockings, when suddenly she heard the sound of wind in the trees and looking up she saw the Blessed Virgin Mary in the Grotto surrounded by a golden light. Bernadette fell on her knees. Our Lady appeared thus to Bernadette eighteen times and gave her a number of messages. She told her that she wished people to come there in procession and to do penance both for themselves and for others. She told her to make a hole in the sand, and water flowed forth.

Many years have passed, and this grotto, then unknown, is one of the best known and most loved places in the Catholic world. Miracles of healing have taken place through the spring of water which was unsealed at the touch of Bernadette’s hand. The history of Lourdes has been one of uninterrupted glory. Millions have come here in procession to do penance. The world thinks only of the physical miracles, but the Church values as far more precious those supernatural healings of the soul which take place here: those marvelous workings of grace in the soul by which the sick who come here and are not cured return home accepting this and perhaps regarding their sufferings as their most precious treasure. This is Lourdes’ greatest gift for those prepared to accept it. And the instrument chosen by Our Lord to bring all this about was little Bernadette, weak and frail.

While Lourdes was passing from glory to glory, however, where was Bernadette? Hidden in her convent at Nevers in central France: stricken with sickness. What was she doing? One day some visitors asked her if she had heard of some of the recent wonders of Lourdes. She answered no. The visitors could not understand how this could be. Bernadette replied, “You see, my business is to be ill.”

Why was it her business? Because it was through sickness that Our Lord had ordained that Bernadette should save her soul. Bernadette did not become a saint because she saw Our Lady and talked with her. She became a saint through her willing acceptance of sickness and suffering in the silence of the convent of Nevers. It was her business to be ill because it was the business given to her directly from heaven. She suffered very greatly and died a painful death; and that suffering and death made her a saint and was her path straight to heaven, because she accepted it as her business, sent to her direct from her heavenly Father. And therefore it was her greatest treasure.

This was something Bernadette had understood from the beginning: the Blessed Virgin had said to her during one apparition that she was not promising her happiness in this world, but the next, while her admonitions on other occasions, including, “Pray for sinners,” “Penance! Penance! Penance!” and “Kiss the ground as a penance for sinners,” clearly indicated the path that Bernadette would have to take.

Towards the end of her life, in 1875, Bernadette had advised a young novice that she “must learn to love suffering. Our Lord gives His crown of thorns to his friends. Seek nothing better.” On another occasion she said, “the more I am crucified, the more I rejoice”.

In this she was only speaking from experience. From this time on she was almost constantly ill, confined to bed, and suffering greatly. Even from her earliest years at Nevers she had been a victim of a tubercular condition of the right knee, but this developed into an abscess in 1877 which left her in constant and agonizing pain. In 1879 she became much weaker, was hardly able to eat and became quite emaciated. She was also tormented by painful sores on all her limbs. On 28th March she was anointed for the fourth and final time, dying on 16th April after a long and painful last agony.

When we are ill

Sometimes, we too have to accept suffering and illness. Most of the sick who return home from Lourdes are not cured: it is also their “business” to be ill. Although we often find it hard to believe and even harder to accept, sickness and suffering are very precious, even though suffering is not something that is good in itself. Although she suffered a great deal, St Bernadette was not a masochist. In December 1878, a few months before her death, when she was confined to bed, a fellow sister noticed an image of St Bernard, her patron, nearby, and asked her about it. Bernadette responded that she prayed to him, “but I don’t imitate him at all. St Bernard loved suffering. I avoid it as much as I can.”

However, for those with very serious illnesses, it may well be that suffering is the way the heavenly Father means them to become saints and enter heaven. And that is the only thing that really matters. What is the whole world worth to us if we do not have the hope of heaven, with Our Lord, Our Lady and all the saints to welcome us? As St Therese of Lisieux, who was proclaimed a Doctor of the Church by Pope John Paul II, said: “Sanctity lies not in saying beautiful things, or even in thinking them, or feeling them; it lies in truly being willing to suffer.”

So for some people it may well be their business is to be ill, to be like Bernadette or Therese, to suffer with Our Lord, to be caught up by their suffering into a tender and intimate communion with the pierced and broken heart of our Divine Saviour. There is no other way to heaven except suffering, whether in this world or in purgatory. Our Blessed Lord saved the world and opened heaven to us through suffering. The more we suffer with Him, the greater chance we have of becoming saints.

The teaching of the saints

This was the teaching of St Vincent de Paul, who said: “If we only knew the precious treasure hidden in infirmities, we would receive them with the same joy with which we receive the greatest benefits, and we would bear them without ever complaining or showing signs of weariness.” More recently, St Faustina in her Diary wrote: “Oh, if only the suffering soul knew how much God loves it, it would die of joy and excess of happiness! Someday, we will know the value of suffering, but then we will no longer be able to suffer. The present moment is ours.”

We may have a friend who has never suffered. What do we say of him? We say, “Oh, he is very charming, but everything has gone well with him so far.” And that little word but reveals the fact that all of us know deep down: that it is only in the hour of suffering and trial that the deepest things in men and women are called forth, either for good or for evil. 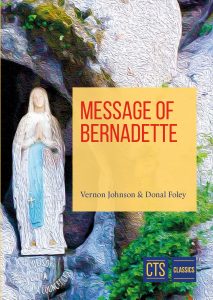 This blog is extracted from our book Message of Bernadette. What is the point of suffering? Why would a good God allow it? This classic text explores the Christian response to these questions in light of the apparitions at Lourdes and the life of St Bernadette.

Meditate deeply on the cross and the value of suffering by ordering your copy of Message of Bernadette.