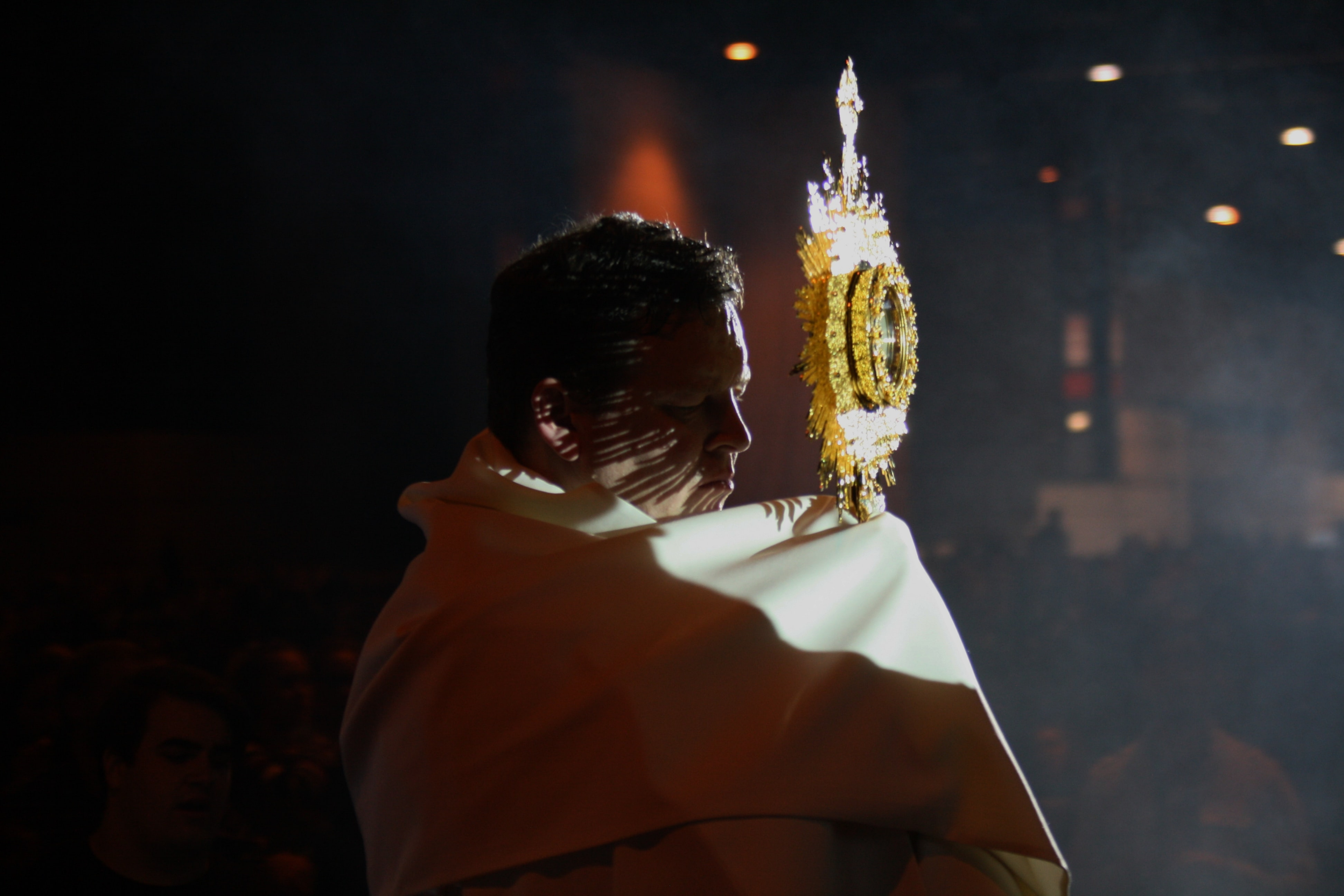 First of all, the minister exposes the Blessed Sacrament while a hymn is sung, during which he incenses the Sacrament. The following or another hymn may be chosen.

O saving Victim, opening
wide / The gate of heaven
to man below / Our foes
press on from every side /
Thine aid supply, thy
strength bestow.

To thy great name be
endless praise / Immortal
Godhead, One in Three /
O grant us endless length
of days / In our true native
land with thee.
Amen.

A time for silent prayer, readings from Scripture, litanies or other prayers and hymns. On some occasions, the Prayer of the Church (the Divine Office) might be said or sung.

Towards the end of the exposition, the priest or deacon goes to the altar, genuflects and kneels. Then this hymn or a suitable alternative is sung, during which the minister incenses the sacrament.

Therefore we, before him bending / This great Sacrament revere / Types and shadows have their ending / for the newer rite is here / Faith, our outward sense befriending / Makes the inward vision clear.

Glory let us give, and blessing / To the Father and the Son / Honour, might, and praise addressing / While eternal ages run / Ever too his love confessing / Who, from both, with both is one. Amen.

The traditional responsory may be used:

V. You gave them bread from heaven (alleluia)
R. Containing in itself all goodness (alleluia)

The minister then says the following prayer (or a suitable alternative)

Lord Jesus Christ,
You gave us the Eucharist
As the memorial of your suffering and death.
May our worship of this Sacrament
Of your Body and Blood
Help us to experience the salvation
You won for us
And the peace of the kingdom
Where you live with the Father
And the Holy Spirit,
One God, for ever and ever. Amen.

The priest or deacon now puts on the humeral veil and blesses the congregation with the Blessed Sacrament.

Immediately after the Blessed Sacrament is reposed in the tabernacle, the following may be sung:

Ant. Let us adore for ever the most holy Sacrament.

Ps. O praise the Lord, all you nations / Acclaim him, all you peoples / For his mercy is confirmed upon
us / and the truth of the Lord remains for ever.

Glory be to the Father, and to the Son / and to the Holy Spirit / As it was in the beginning, is now / and ever shall be, world without end. Amen.

Ant. Let us adore for ever the most holy Sacrament.

Order your copy of Eucharistic Adoration to discover more prayers and meditations before the Blessed Sacrament, and to support the mission of CTS.