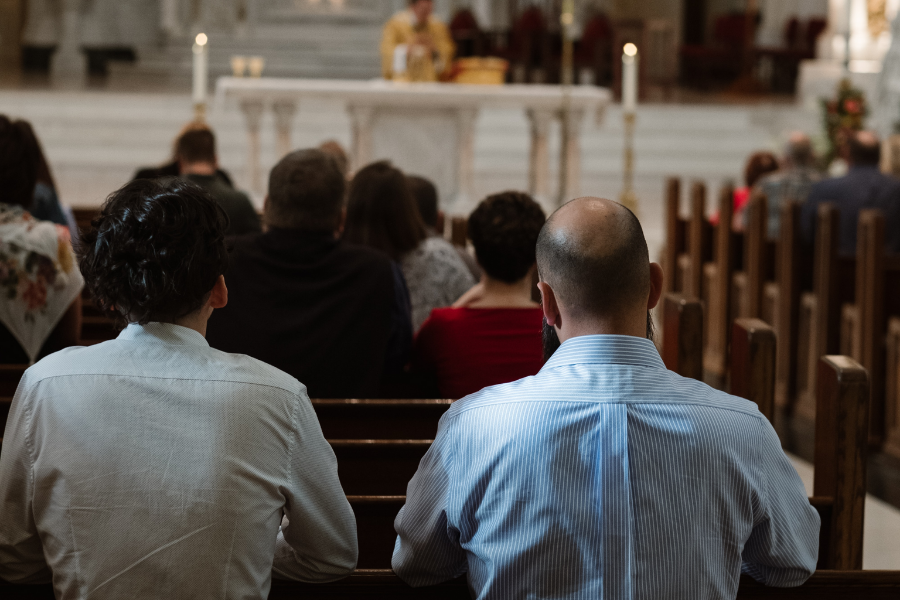 Praying the Mass is the fully conscious and active participation in the Eucharist. This is the prayerful engagement in the Mass, aided by proper understanding, good preparation and the application of its power and blessings to our lives.

We can prepare well for Mass in general by studying the structure and prayers of the Mass so that our participation is better informed. In addition, the more our lives conform to the Gospel, the better we shall appreciate the Mass.

We can prepare well for a particular Mass by going to Confession and by arriving in good time to pray before Mass. If receiving Communion, we must abstain for at least one hour beforehand from all food and drink except water and medicine.

We can participate well at Mass generally by being attentive and by uniting our own interior prayers to the words, actions and gestures of the priest. It is also important to: respond and sing clearly; listen carefully; try to understand what is happening; maintain prayerful silence; receive the Eucharist with the greatest reverence and genuflect with respect.

It is good to spend a few minutes of prayer in church after Mass. This is a way of thanking God for his blessings. It also enables us to be mindful of the resolutions we have made so that the power of the sacrament will be fruitful in our lives.

Difficulties with praying the Mass

Makes no sense. The Mass is rich in meaning and is unlikely to make immediate sense. Patience, prayer and study help us
to appreciate its greatness.

Boredom. The Mass is a prayer and something we need for our souls. It is not mere entertainment. However, in practice it will engage us deeply if we attend to the words and think and pray about what they mean.

The most important help in praying the Mass is to realise the supernatural and miraculous dimension of the Eucharistic sacrifice and the presence of heaven. At the Mass we join with the heavenly liturgy spoken of in the New Testament.

You have come to Mount Zion and to the city of the living God, the heavenly Jerusalem, and to innumerable angels in festal gathering, and to the assembly of the first-born who are enrolled in heaven, and to a judge who is God of all, and to the spirits of just men made perfect, and to Jesus, the mediator of a new covenant, and to the sprinkled blood that speaks more graciously than the blood of Abel. (Heb 12:22-24)

The Structure of the Mass

Mass begins with the Sign of the Cross, to commend the sacrifice to the Trinity. In the Penitential Rite all ask for forgiveness for their sins so that they may worthily share in the Eucharist. The Gloria, a hymn of praise and thanksgiving, is followed by the opening prayer.

LITURGY OF THE WORD

The readings from the Old and New Testaments, including the Psalm, are proclaimed. The priest or deacon reads the gospel, about the words and life of Christ. The homily explains some point of the readings or teaching of the faith. This is followed by the creed, a public prayer and profession of faith. Finally, the needs of the Church and the world are brought before God in the intercessions.

LITURGY OF THE EUCHARIST

At the offertory, the faithful offer bread and wine as a token of their own sacrifice to be offered by the priest. The preface gives thanks to the Father for his work of salvation and the Sanctus unites this to the heavenly worship of the angels and saints. At the epiclesis the priest extends his hands over the gifts and calls on the Holy Spirit to sanctify them and transform them. When the priest speaks the words of consecration, the bread and wine become the body and blood of Christ. He elevates the host and the precious blood for adoration. In the rest of the Eucharistic prayer the priest recalls the Paschal mystery made present in the Mass and intercedes for the living and the dead. Finally, he raises the host and the precious blood in a gesture of sacrifice and prays the doxology. The faithful assent with an ‘Amen’.

The faithful pray together the Lord’s Prayer and express their unity and forgiveness in the Sign of Peace. While all pray the Lamb of God, the priest breaks the host. After the priest raises the host, all acknowledge their unworthiness and God’s healing mercy. The priest then receives Holy Communion and distributes it to the people.

The priest blesses and sends the faithful out on mission. 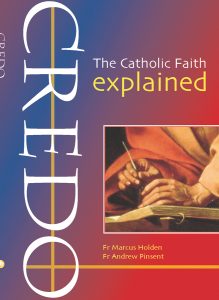 This blog is extracted from Credo, which is accurate, reliable and to the point. Drawing on scripture and tradition, and cross-referenced to the Catechism and the Compendium, Credo’s 25 chapters introduce 4 areas: Creed, Sacraments, Morals and Prayer.

To learn more about the Catholic faith in a succinct way, order your copy of Credo.