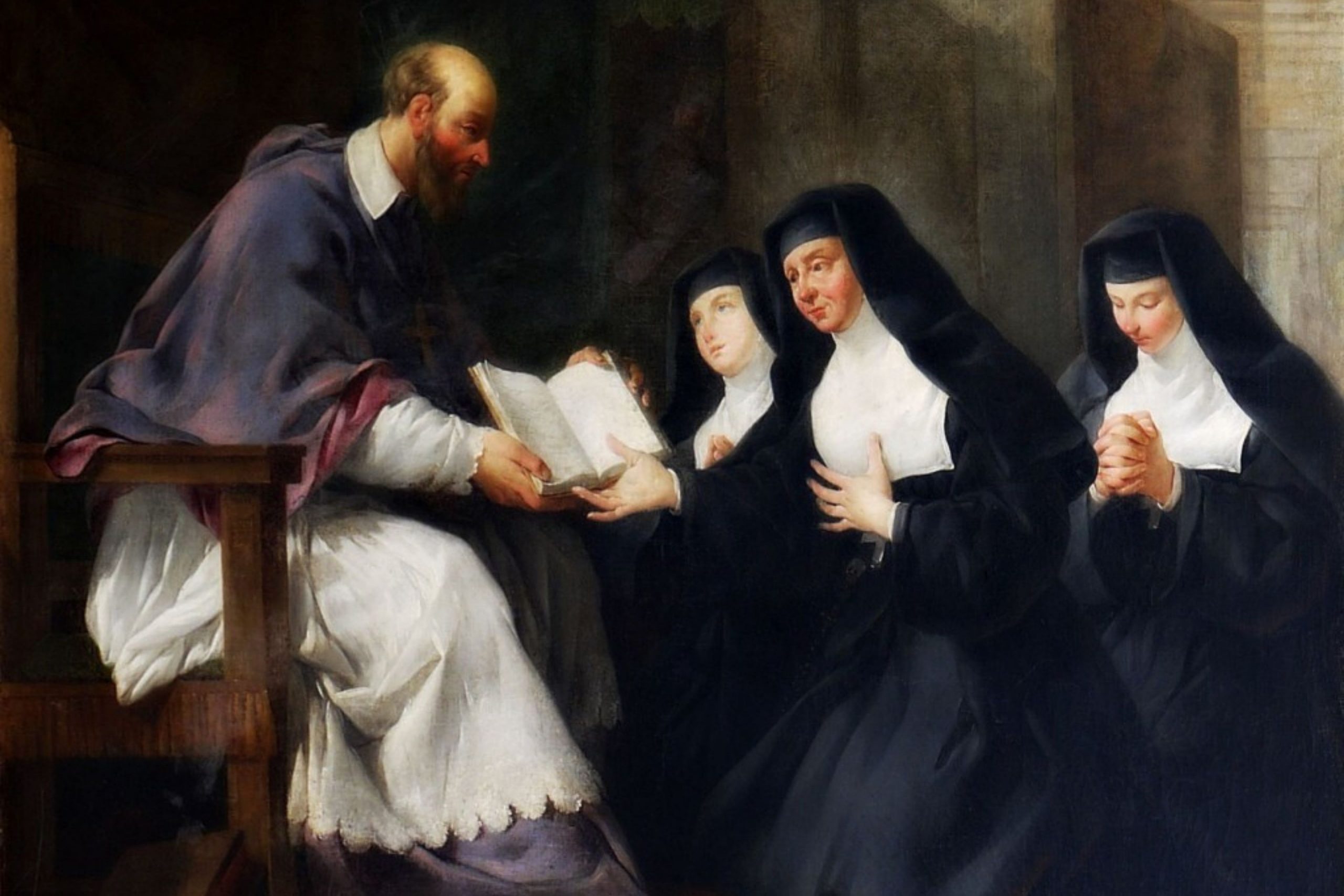 In 1604 St Francis de Sales was preaching the Lenten sermons in Dijon, and it was here that he met Jane Frances de Chantal (1572-1641). She came from a noble Burgundian family and had taken a vow of chastity after being tragically widowed when she was only 29. There was immediate rapport and in response to her request, he willingly advised her on her duties as daughter, mother and member of society, eventually becoming her spiritual director from whose wisdom she benefited while he lived. At Annecy in 1607, she shared with him her thoughts about entering the religious life.

She had been much impressed by the mystical wisdom of Saint John of the Cross and Saint Theresa of Avila to which she had been introduced by the holy Carmelite nun, Anne of Jesus; she found the same wise realism in Francis who encouraged her sense of vocation. They both recognised what they called ‘the squalor of the Cross’ in the squalor of towns and cities, and determined to do something about it. They recruited a number of helpers including Francis’ cousin Madame de Charmoisy whom he urged to “become a servant of the poor, serve them when they are sick with your own hands, cook for them at your own expense, do they sewing and washing.” Jane Frances herself took “her scissors and medicine into dens and hovels, cropped infested hair, dressed ulcers, and cleaned the incontinent.”

From such work evolved the decision to found a new religious congregation that would enable women, including those in delicate health, to lead the religious life and at the same time work outside the cloister. This was a departure from the norm of enclosure that would later be followed by Saint Vincent de Paul when he founded the Sisters of Charity. In 1610, Francis opened the first convent of a dozen nuns at Annecy with Jane as superior, but the Holy See insisted that enclosure and separation from the world must be observed, a decision that led to the vocation becoming contemplative in character.

Francis had chosen the Rule of Saint Augustine for the new community because it demanded few corporal austerities. He told the Sisters that humility before God and meekness before one’s neighbour are more important than austerity, and that perfect self-denial is in obedience. About meekness he wrote to them: “If there was anything more excellent than meekness, God would certainly have told us. There is nothing to which he so earnestly exhorts us as to learn of him and be ‘meek and humble of heart’. Surely it is right to obey this command of Our Lord and learn from him the virtue he so eminently practised and so highly esteems. No one is better informed in these matters than God himself.” The Rule allowed the sharing of goods in common, so that there would be no time-consuming or fruitless worries about the necessities of life, though it advocated detachment from possessions in the spirit of poverty that relinquishes ownership or right to use.

Francis pointed them to the Mother of God’s spirit of piety, charity, humility, meekness and simplicity, and promoted the daily recitation of the Little Office of the Blessed Virgin Mary that Alcuin of York had composed in the ninth century, and Saint Peter Damian revised in the eleventh. He introduced them to the methods of meditation, and the shorter recollections that focus inward attention on the presence of God with the thought that words and actions can affect spiritual life, and explained the essential benefits of spiritual reading and retreats. Pope Paul V raised the congregation to the status of an Order that was blessed with rapid expansion thanks to the prudence and dedication of the Founders.

In 1555, at the Peace of Augsburg, the Catholic German empire had accepted the legality of the Protestant religion in Lutheran states. However, in 1618, as the Order of the Visitation blossomed, hostilities were resumed when some Bohemian nobles threw two of Emperor Ferdinand’s regents out of a fatally high window in Prague. Ferdinand declared war on Frederick V, the Protestant king of Bohemia, seized Protestant territories, and closed Lutheran churches and schools in Bohemia, Austria and Moravia. The conflict engulfed Europe as Lutheran rulers in Germany and Denmark tried to reclaim territories with the assistance of English and Dutch forces.

Denominational disputes, and the impetus of the Catholic Counter-Reformation became a cloak for nationalist causes and secular ambition and some strange alliances, as much political as religious, were forged. Catholic France joined forces with Protestant Sweden, and several Protestant German states aligned themselves with the Emperor. Throughout Europe, innocent men, women, and children were slaughtered by invading armies and foreign mercenaries, or left to starve as their villages and crops were laid waste. It would not be until 1648 that the Peace of Westphalia would restore to each ruler in the Empire the right to determine the religion of his state, and Calvinism, Lutheranism, and Catholicism were all declared legitimate.

In 1619, Francis and Jane Frances went to Paris to inaugurate the Order’s convent in the city and, by happy coincidence, met Saint Vincent de Paul. There was an immediate union of holy minds, and it is a measure of the esteem in which they held him that they entrusted him with the spiritual care of the Visitation Sisters. Vincent described Jane as one of the holiest people he had ever met, and he brought Francis’ original intention of an unenclosed Order to fruition when he founded the Sisters of Charity with Saint Louise de Marillac. That the two great men were friends gave an added stimulus in their assisting Pierre de Bérulle to refresh the spiritual life of the Church in France.

They made telling contributions to the French School of Spirituality that motivated Catholic revival in France and her immediate neighbours; it remained an exemplary influence in the universal Church until the twentieth century.